A video viewed hundreds of thousands of times on social media purports to show a Filipino celebrity from Philippine Vice President Leni Robredo's home region endorsing the presidential bid of Robredo's rival Ferdinand "Bongbong" Marcos Jr. However, the video had been digitally doctored to add false references to Marcos Jr. The creators of the original video and the management team for the celebrity denounced the posts as a "hoax".

Venus Raj is a beauty pageant titleholder and a runner up in the 2010 Miss Universe event.

Bicol is a region south of the Philippine capital Manila where the hometowns of Raj and Robredo are located.

"Bongbong" and "BBM" are popular nicknames for Marcos Jr -- son and namesake of the late dictator -- who currently maintains a commanding lead over Robredo and other presidential hopefuls in voter surveys for the May 9 polls. 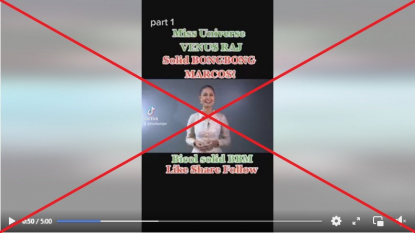 In the video, Raj can be heard saying: "Perhaps many of you seem to be losing hope for our beloved Philippines. Did you know that the Philippines was known as the pearl of the Orient in the 1950s after World War 2?

"Not only that, we were second to Japan. And according to the World Bank, we have the best economy in the region."

Similar videos and claims were also shared on Facebook here and here; on YouTube here; and on TikTok here.

Comments to the posts suggest people were misled.

"Thank you for supporting our great tandem Bbm Sara solid landslide victory in 2022," one commented.

"God bless you, Madam Venus Raj. Good choice and salute to you for supporting BBM AND SARA," another wrote.

While Raj's claims about Philippine economic history are inaccurate, the claim that the video shows her endorsing Marcos Jr is false.

The video had been digitally altered to add references to Marcos Jr.

Keyword searches found the clip was taken from a seven-minute and 40-second video originally published on Facebook on December 14, 2021.

The original video does not contain the text overlay about Marcos Jr.

An AFP review of the original video also found Raj never mentioned Marcos Jr. She only talked about qualities voters should look for in leaders ahead of the 2022 polls.

Below is a screenshot comparison of the doctored video (left) and the original (right).

The nonprofit organisation Christian Values Movement that created the video labelled posts linking it to Marcos Jr a "hoax" in a statement posted on Facebook on December 31, 2021.

"We would like to inform everyone that CVM does not promote nor endorse any candidate," the statement said.

CVM issued another statement denouncing the posts on January 10.

"Those are joint statements between CVM and Venus. We are not endorsing a specific candidate," a representative from CVM told AFP.

"Stealing our non-partisan videos to twist our message for the Filipinos and Christian Values has no place in a good cause," she wrote.