A video has been viewed thousands of times in social media posts that claim it shows police arresting women protesting a hijab ban in schools in the southern Indian state of Karnataka in February 2022. The video has been shared in a false context; while police have detained some pro-hijab demonstrators, the footage has circulated since September 2021 in reports about students protesting changes to the state's education policy.

"All Muslim countries should drown in shame. Extreme torture in India, they’ve started arresting the sisters protesting against the hijab ban," reads an Urdu-language tweet posted on February 10.

The video -- viewed more than 7,000 times -- shows police dragging people from the street, some of whom are wearing hijabs. 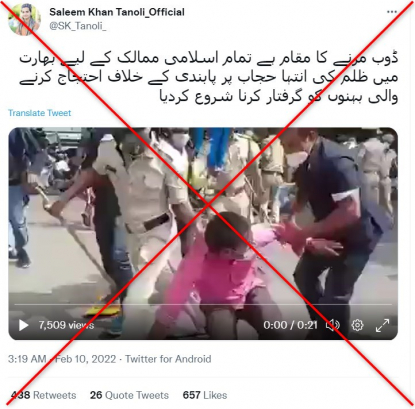 Tensions have been high in Karnataka since late 2021, when at least four schoolgirls were prevented from wearing the Muslim headscarf, sparking protests that have since spread across India.

In an attempt to calm tensions, Karnataka's state government temporarily closed schools, which reopened on February 16 under tight security.

While pro-hijab demonstrators were reportedly detained in various cities including the capital Delhi, the video has been shared in a false context.

A reverse image search found a longer video with corresponding scenes posted on YouTube by India Today on September 15, 2021.

"Police say students broke barricades after which they were forced to use [batons] to control the crowd."

Below is a screenshot comparison of the video in misleading posts (left) and matching scenes from India Today's video (right).

SahilOnline, an Indian media outlet in Karnataka state, reported on the same protests on September 15, 2021. Similar scenes can be seen from the two-minute mark of its video.

Indian media outlets The Hindu and The New Indian Express reported at the time that members of student group Campus Front of India staged protests against a new education policy in the state capital Bengaluru.