Skip to main content
A protester holds a sign at an April 13, 2021 rally outside the Brooklyn Center police station in Minnesota to protest the death of Daunte Wright (AFP / Kerem Yucel)

Social media posts claim Daunte Wright, a 20-year-old Black man who was fatally shot by police in Minnesota, was wanted for not paying a fine for marijuana possession. This is false; while there was a previous cannabis-related charge involving Wright, the warrant for his arrest was issued because he failed to appear in court over illegal possession of a weapon and fleeing the police.

“In October of 2019, Daunte Wright, who was a child, smoked a single joint of weed and was given a ticket for it,” says an April 13, 2021 Facebook post shared after the young Minnesota man’s death.

The post says that Wright pled guilty to a misdemeanor and was charged $156, but did not pay in time and an arrest warrant was issued “in a city that claims it decriminalized weed.” 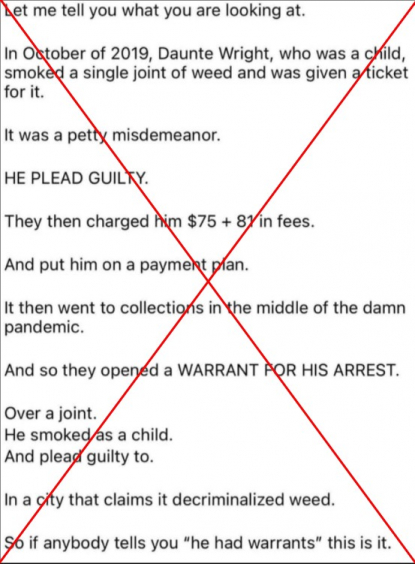 Some posts attribute the content to activist Shaun King, but it appears to have been deleted from his Instagram page, although a thumbnail apparently related to the post was still visible in Google search results on April 15.

The shooting by Kim Potter, who was arrested on April 14, is the latest in a long series of police killings of Black men in the United States. Brooklyn Center Police Chief Tim Gannon said Potter mistook her handgun for her Taser.

The killing of Wright, which sparked days of protests in Minnesota, came during the trial of former Minneapolis police officer Derek Chauvin on charges that he murdered George Floyd. The Black man’s May 2020 death has led to a national reckoning on racism and police violence.

According to a statement from the Brooklyn Center Police Department, a suburb north of Minneapolis, officers pulled over a driver for a traffic violation, and attempted to take him into custody upon discovering he had an outstanding warrant. He got back into his car, and one of the officers fired, striking the driver, who died at the scene

As several news organizations reported, the warrant was issued because Wright had failed to appear in court.

“The warrant was issued because he missed an April 2 court date,” Kyle Christopherson, a spokesman for the Minnesota State Court Administrator’s Office, said by email.

The arrest warrant, which is available on the Minnesota Court Records Online database, shows that the court appearance was related to illegal weapon possession and fleeing police. 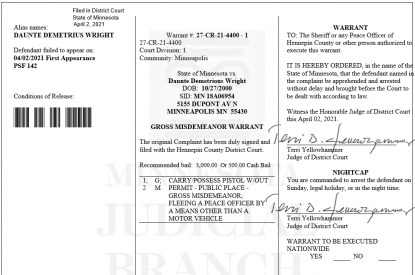 A copy of Wright’s criminal record obtained from the Minnesota State Court Administrator’s Office lists a charge of marijuana possession as having been dismissed.

Christopherson said that the arrest warrant issued over the missed court date was “the only one still active upon his death. All of the other warrants had been cleared for various reasons.”