A screenshot of a purported news article claiming that a cargo ship owned by the Clinton Foundation was raided at a port in the US city of Baltimore has been shared in multiple posts on Facebook. The posts, however, are misleading; the article is from a self-described satirical website and the Clinton Foundation told AFP it does not own any cargo ships.

The screenshot was published on Facebook here on March 27, 2021. 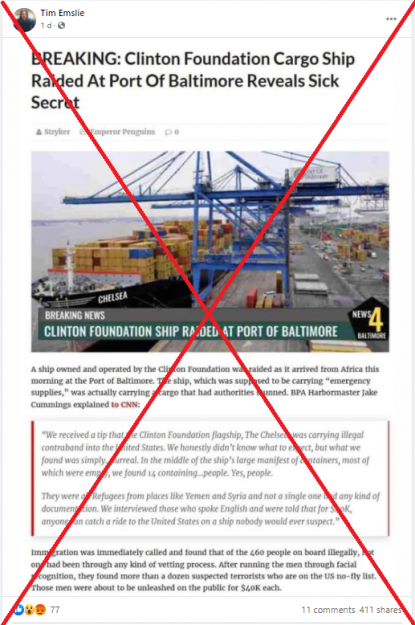 An excerpt of the article reads, in part: “A ship owned and operated by the Clinton Foundation was raided as it arrived from Africa this morning at the Port of Baltimore. The ship, which was supposed to be carrying ‘emergency supplies,’ was actually carrying a cargo that had authorities stunned. BPA Harbormaster Jake Cummings explained to CNN:

“‘We received a tip that the Clinton Foundation flagship, The Chelsea, was carrying illegal contraband into the United States. We honestly didn’t know what to expect, but what we found was simply…surreal. In the middle of the ship’s large manifest of containers, most of which were empty, we found 14 containing…people. Yes, people.’”

A spokesperson for the Clinton Foundation told AFP by email on March 30, 2021, that the organisation does not own any ships.

The spokesperson also pointed to a tweet by the Port of Baltimore published on May 12, 2017, which dismissed the story as false.

A story was published on websites mentioning the Port of Baltimore & a cargo ship raid. It is false. None of the events it cites took place.

“A story was published on websites mentioning the Port of Baltimore & a cargo ship raid. It is false. None of the events it cites took place,” the tweet reads.

A search of the article’s text resulted in an archived version of a 2017 article hosted on a defunct website called The Last Line of Defence.

At the bottom of the site’s “About Us” section, which is archived here, it states that the site is satirical.

“DISCLAIMER: America’s Last Line of Defense is a satirical publication that uses the imagination of liberals to expose the extreme bigotry and hate and subsequent blind gullibility that festers in right-wing nutjobs. We present fiction as fact and our sources don’t actually exist. Names that represent actual people and places are purely coincidental and all images should be considered altered and do not in any way depict reality,” the text reads.

“In other words, if you believe this crap you’re a real dumbass.”