Skip to main content
A China Eastern Airlines aircrew member arrives at Sydney airport after landing on a plane from the Chinese city of Wuhan on January 23, 2020. (AFP / Peter Parks)

A purported screenshot of a warning from health authorities in the Australian state of Queensland for the novel coronavirus has circulated on Facebook alongside a claim that the government issued an advisory against travel to the Chinese city of Wuhan, where the epidemic erupted, and several Queensland suburbs with a large Chinese population. The claim is false; this is a doctored image; Queensland Health told AFP there had been no relevant warning issued against specific suburbs as of January 29, 2020.

The image was shared here in a Brisbane-based Facebook group with nearly 3,000 members on January 26, 2020.

The text in the screenshot reads, in part: “Department of Health media releases | Queensland Health 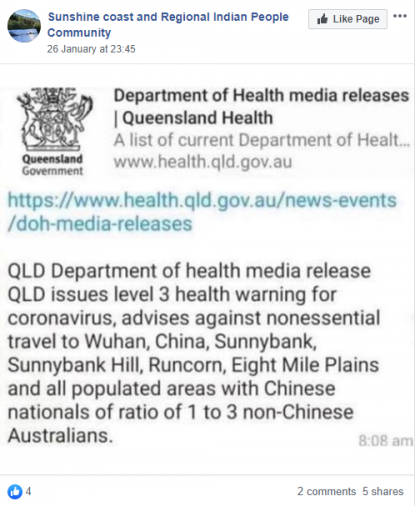 As of January 30, 2020, the novel coronavirus has killed at least 170 people and infected thousands others in China since it first emerged in early December 2019 in the central city of Wuhan, AFP reported here. The World Health Organisation notes that the virus, officially known as "2019-nCoV,"  is in the "family of viruses that include the common cold, and viruses such as SARS and MERS."

The same misleading image was also shared here, here, here and here on Facebook, and in other languages, such as here in Korean and here in Vietnamese.

This claim is false; Queensland Health confirmed that no such warning was every issued.

The spokesperson also urged people to visit the Queensland Health official website for information about the virus, as well as guidelines for the general public, health professionals and various industries in face of the outbreak.

A keyword search on Queensland Health's website also found no suburb-specific warning over the new virus.

Below is a screenshot of a section of the statement: 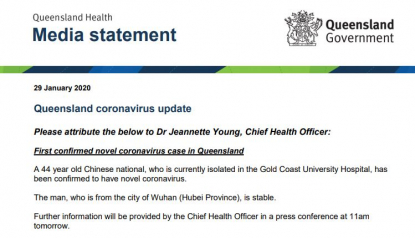 Queensland has confirmed its first case of novel coronavirus - a 44 yo Chinese national, who is isolated in the Gold Coast University Hospital.

The Chief Health Officer and I will have more information tomorrow. For info: https://t.co/zIqJOHRxNx #qldpol #auspol @qldhealthnews

Including the new Queensland case, the total number of confirmed cases of coronavirus in Australia has reached seven, the Sydney Morning Herald reported on January 30.

The outbreak also led Australia's Department of Foreign Affairs and Trade to issue a travel advice on the Smarttraveller website.

For China as a whole, the agency issued a level three “reconsider your need to travel” advice, the second most severe on the government’s four-tier warning system. The most serious “do not travel” warning was handed down to Hubei province, where Wuhan is located.

Duncan Pegg, the Labor Member of Parliament for Stretton, Queensland, also tweeted about the fake Queensland Health warning on January 27, 2020.

The tweet reads: “This media release is 100% FAKE!!! FAKE!!! FAKE!!! I don't normally like to give any credence to ppl who seek to malign our community but wanted to make things clear this time. To get latest updates go to the Queensland Health website & FB page. Any questions call 13HEALTH.”

This media release is 100% FAKE!!! FAKE!!! FAKE!!! I don't normally like to give any credence to ppl who seek to malign our community but wanted to make things clear this time.

Fears sparked by the new coronavirus have prompted hoaxes about “contaminated” foods and locations in Australia, as debunked by AFP here.