A photo of Rahul Gandhi, a top politician in India’s main opposition party, saluting has been shared hundreds of times on Facebook and Twitter alongside a claim that he disrespected the Indian flag by saluting with his left hand. The claim is false; the image has been altered to mirror a 2011 photo of Gandhi correctly saluting with his right hand.

The photo of Gandhi, who is the former president of the Indian National Congress party, was shared here on Facebook on January 26, 2020. It had been shared more than 600 times before it was removed. 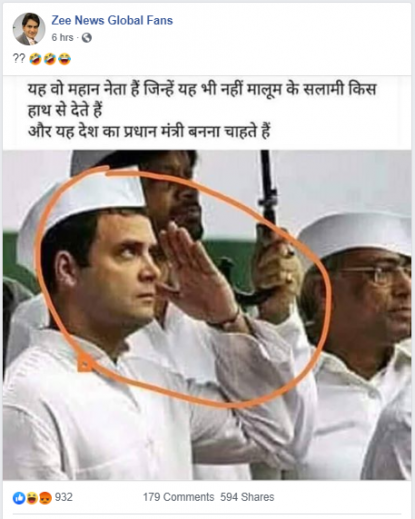 The Hindi text on the top of the photo translates to English as: “This the great politician who does not even know which hand to raise in salute and he aspires to become the prime minister of this country.”

While it is true that ceremonial salutes should be given with the right hand, according to Indian Ministry of Defence guidelines, the claim about Gandhi is false.

The image has been doctored to create a mirrored version of a photo of Gandhi at an Independence Day celebration on August 15, 2011.

The original photo, which shows Gandhi saluting with his right hand, was taken by an Associated Press (AP) photographer and was published here.

Other reverse image searches on Google found the original photo was published in several Indian media reports on August 15, 2011, for example here by NDTV and here by Zee News.

Below is a screenshot of the NDTV report: 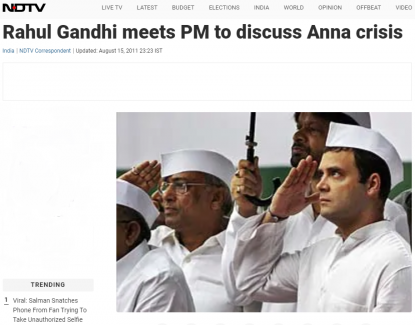 Screenshot of the NDTV report

Other slightly different photos that also accurately show Gandhi saluting with his right hand at the same 2011 event were published by  AFP here, Getty Images here and AP here.