Multiple Facebook posts shared hundreds of times claim health authorities should “explain” why two needles were used to give Malaysian Prime Minister Muhyiddin Yassin a Covid-19 vaccine. The posts came after several other world leaders faced false accusations that they faked their Covid-19 vaccinations. The claim is misleading: it is common to change needles between the preparation and administration of vaccines for hygiene and practical reasons, according to health experts.

“Hope the government, especially the MALAYSIAN MINISTER OF HEALTH Adham Baba explain to the citizens and country why there is a difference in syringes during the COVID-19 vaccine injection process on Muhyiddin?” the post’s caption continues.

Muhyiddin became the first person in Malaysia to receive a Covid-19 vaccine on February 24, 2021.

A needle hub is located between the barrel of the syringe containing the vaccine and the needle’s shaft. 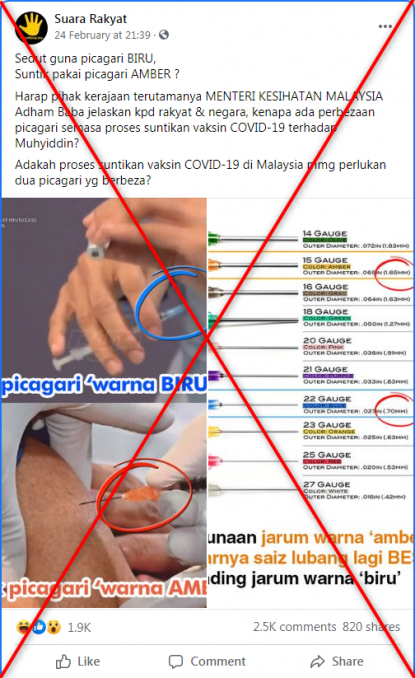 The two images of syringes were taken from this news footage on the Facebook page for Malaysian broadcaster KiniTV BM of Muhyiddin’s vaccination.

A wave of misinformation around the vaccination of world leaders has emerged as countries scramble to roll out mass campaigns, with social media posts falsely accusing various politicians of faking the jab.

Similar posts about Muhyiddin’s vaccination have circulated on Facebook in Malaysia, including here, here and here.

A video report from the New Straits Times shows that needles were indeed switched during Muhyiddin’s Covid-19 vaccination. The syringe seen in the footage initially has a blue needle hub, which is then changed to an orange needle hub.

The Ministry of Health Malaysia said in a statement issued to journalists on February 25, 2021, that the needle switch was required for practical and hygiene reasons.

“The different coloured needles relate to a difference in bore size. The needle used to aspirate from a vial is bigger in size to ensure smooth extraction. Smaller bore size needles (red or orange) for inoculation ensure less pain and bruising,” it said.

“In addition, different needles are required to prevent cross-contamination between patients.

“Importantly, the vaccine drawn from the vial and given to the patient is unchanged.”

The change of needles during Muhyiddin’s vaccination was not suspicious, according to medical professionals.

General practitioner Dr Arisman Wenge Abdul Rahman explained in a Facebook post, on February 24, 2021, that changing needles is a normal procedure during a vaccination.

“1. Take the needle with the larger size to pull in medicine from the vaccine ampoule/vial. Why? Because it’s a faster and easier process to pull in the medicine into the syringe quickly,” the Malaysian-language post reads.

“2. After the medicine fills the syringe, then the nurse/doctor will change only the needle to a more appropriate size that is (according to) the place of injection and the individual’s body size. The syringe will not change.

“Every needle’s size is different in diameter and length…

“Besides that, among the important reasons to change the needles is to avoid cross contamination or cross infection from the surface of the ampoule/vial to the skin and the layer beneath the skin.”

Paediatrician Dr Anayasmin Azmi wrote in a post on Twitter here that needles should be changed “to avoid contamination” and “to reduce the pain because of the smaller sized needle”.

Muhyiddin’s vaccination was in line with the standards prescribed by the Centers for Disease Control and Prevention (CDC) in America here and Britain’s National Health Service (NHS) here.

This video of a Covid-19 vaccination in the US shows the same process of switching the needles for the same syringe.

Colour coding hypodermic needles is a known standard to allow for quick identification of the size of the needles, manufacturers explain.