A video has been shared in multiple posts on Facebook alongside claims that it shows real footage Hazrat Bilal, a 7th century companion of the Prophet Muhammad, reciting the Muslim call to prayer. The posts are misleading; the video is in fact a clip of an actor’s portrayal of Bilal in a Turkish film released in 1973.

The post’s Urdu-language caption translates to English as: “Azan [Muslim call to prayer] of Hazrat Bilal

Bilal, who is also known as Bilal ibn Rabah, was a companion of the Prophet Muhammad and one of the earliest converts to Islam. He died in 640.

Some social media users appeared to believe the video was genuine footage of Bilal, posting comments such as “Mashallah [God willing or what God has willed]” and “Look at the beautiful voice Allah gave Hazrat Bilal. When he doesn't give the Azan then the moon doesn't come out. May Allah grant all of us lives like Bilal, amen”. 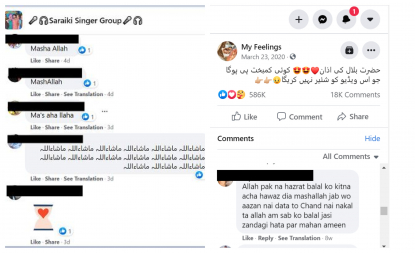 Screenshot of comments from users, taken on March 4, 2021

The clip was published in May 2017 on YouTube here by Turkish media outlet Kanal 7. The video is titled “The Last Azan of Bilal-i Habeşi” and links to another video showing the entire film.