Facebook posts claim Native Americans in North Dakota will be the first subjects to receive a novel coronavirus vaccine, in one case citing a local news article as “evidence.” This is false; North Dakota was selected by the US Centers for Disease Control and Prevention (CDC) to be part of a project preparing for vaccine distribution -- not injection -- once Covid-19 shots are approved.

“NORTH DAKOTA IS GOING TO INJECT NATIVES FIRST,” claims an August 11, 2020 post, continuing: “The Governor of ND has just signed a deal for the CDC to come inject those on Standing Rock and other Indian Tribes in ND with this deadly vaccine first.” 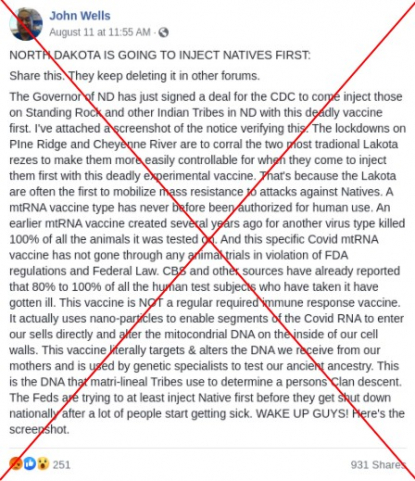 The North Dakota Department of Health announced on August 10 that the state was one of four selected by the CDC to participate in a Covid-19 pilot project planning for vaccine distribution. In the first paragraph, the statement says: “This is not a vaccine trial.”

“The CDC is interested in learning from tribal entities to explore strategies to reach American Indian populations and help determine opportunities as it relates to vaccine planning and distribution. All five tribal entities and the ND Indian Affairs Commission are invited to participate in the planning process.”

Native Americans have been among the hardest-hit by novel coronavirus in the United States.

Scott Davis, executive director of the North Dakota Indian Affairs Commission, said in a video interview with local news: “There’s been a lot of misinformation out here on this... a lot of, I’ll just say, terrible social media posting.”

The idea that the state is going to force a Covid-19 vaccine on Native American tribes is “totally, totally false,” he continued, although he said he understands existing mistrust of the US government because of past experience.

“At the end of the day, the tribes are gonna have their own processes, their own internal review boards… to review, verify if this vaccine is proven, if it’s the right vaccine. They’re gonna administer their vaccine how they see fit.”

Anthony Fauci, the United States' top infectious diseases official, said on August 19 that the government wouldn't make any future Covid-19 vaccine obligatory for the general public -- though local jurisdictions could make it mandatory for some groups, like children who attend public schools.

"You don't want to mandate and try and force anyone to take a vaccine. We've never done that," said Fauci, a member of the White House coronavirus task force, during a video talk organized by George Washington University.

"You can mandate for certain groups of people like health workers, but for the general population you can't," he added, citing the example of the National Institutes of Health, where health workers can't treat patients without a flu shot.

Out of context newspaper excerpt

In another post, available here, a commenter added a screenshot from this article to serve as evidence for the claim.

“The federal agencies chose North Dakota for the program, in part, because they are interested in forming plans for vaccine distribution on Native American reservation, of which the state has five,” the screenshotted article excerpt reads in part.

Another commenter replied, “Guinnie pigs,” and the first responded: “Yep!!! Do not volunteer. Do not consent.” 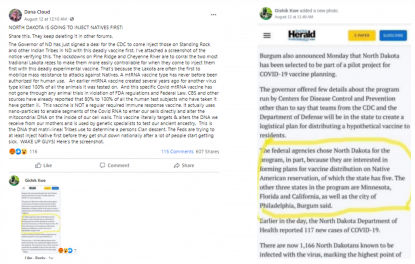 Screenshots of a false Facebook post (top left) with a misused quote (bottom left and right), taken on August 25, 2020

The journalist who wrote the article confirmed the text was taken out of context and the claim on Facebook is false.

Jeremy Turley, the reporter who wrote the cited article, told AFP in an email: “I can safely say that this poster either misinterpreted what I wrote or flat-out fabricated information.”

Turley, a Bismarck correspondent for Forum News Service, explained: “The program has nothing to do with clinical trials or mandating vaccines for anyone. In reality, it's more like a theoretical supply chain exercise from what I understand.”

There are many potential Covid-19 vaccines in different stages of testing, among them the Moderna and Pfizer / BioNTech shots, both of which involve mRNA. Both Facebook posts list several other falsehoods about the vaccine which they mislabel as “mtRNA.” They also call the shot “deadly” and claim that it alters human DNA.

The Facebook posts claim: “A mtRNA vaccine type has never before been authorized for human use… this specific Covid mtRNA vaccine has not gone through any animal trials in violation of FDA regulations and Federal Law…This vaccine literally targets & alters the DNA we receive from our mothers.”

Dr Shelley Payne, director of the LaMontagne Center for Infectious Disease at the University of Texas at Austin, told AFP in an email, “There appears to be a misunderstanding of what the vaccine is. The RNA vaccine is mRNA (messenger RNA), not mtRNA (mt = mitochondrial).”

Payne explained that mRNA contains the information needed for cells to make proteins, and the mRNA Covid-19 vaccine directs cells to make a stable form of the virus protein. The cells then read the mRNA, make the protein and present it to the immune system, so the body can develop an immune response.

“The vaccines in human trials are not deadly,” she continued. “Because of the need for rapid development, some of the vaccines did not go through the long-term, large-scale animal tests for efficacy, i.e. how well the vaccine protects, but they were tested in animals for safety… A vaccine that killed animals or had serious side effects in the Phase 1 and 2 studies would not be used.”

AFP Fact Check previously debunked false claims about vaccine safety amid the accelerated timeline for development of a Covid-19 immunization.

“The Moderna RNA vaccine that I assume the Facebook post was talking about is a novel approach that has never been used before as a human vaccine,” said Dr Julian Leibowitz, an expert in coronaviruses who is a professor of microbial pathogenesis and immunology at Texas A&M’s College of Medicine.

But he told AFP via email that, following phase one and two trials,“it was judged entirely safe with no significant adverse events,” adding: “There is no evidence that it affects the recipients’ DNA at all and no mechanism that I can think of that would allow it to.”

US Food and Drug Administration guidelines on the development and licensure of Covid-19 vaccines are available here.

AFP Fact Check has debunked more than 600 examples of false and misleading content about the novel coronavirus, available here.