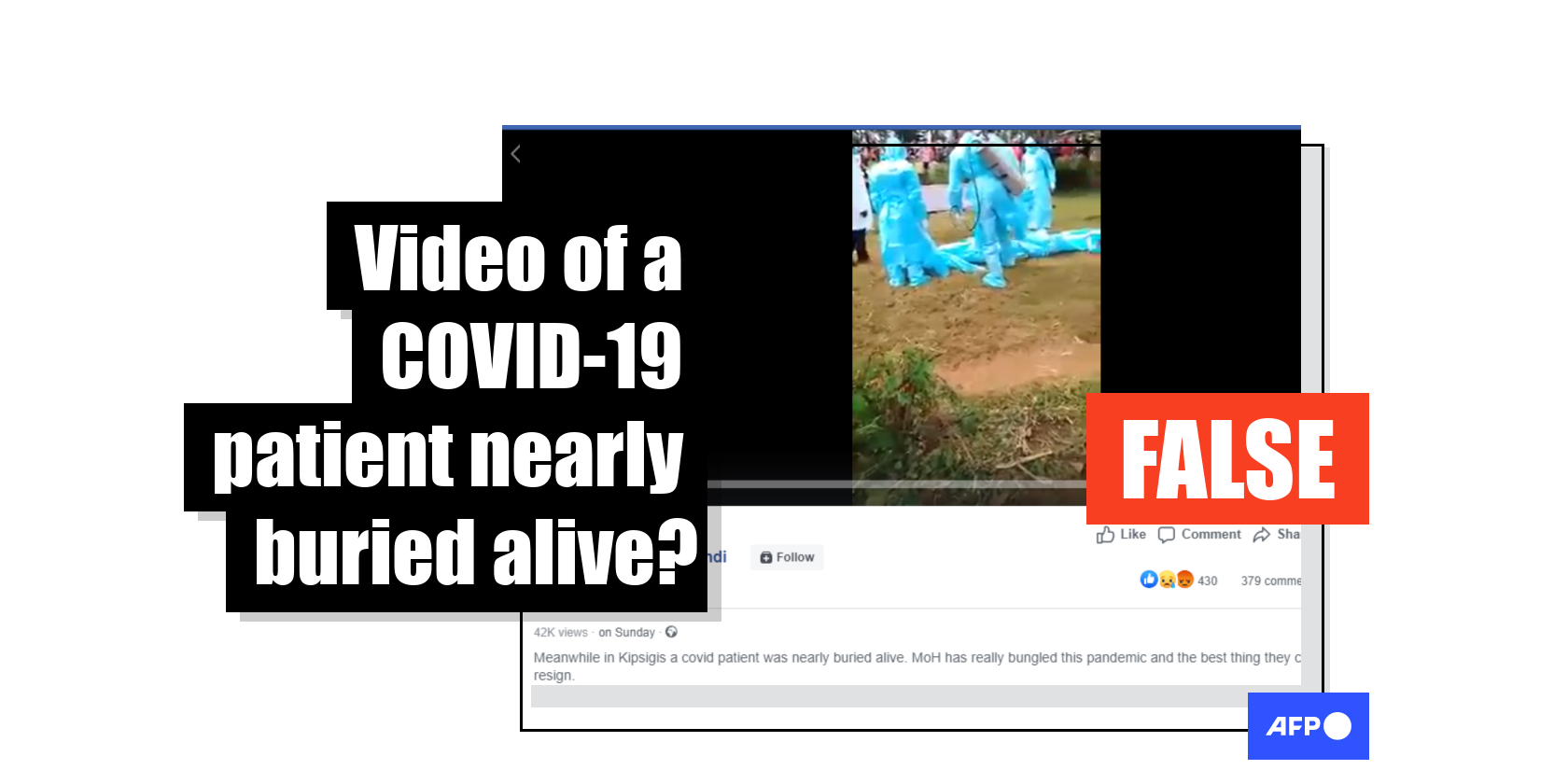 A video viewed thousands of times claims to show a Covid-19 patient in a Kenyan village who was “nearly buried alive” during his own funeral. The claim is false; county officials confirmed to AFP Fact Check that while the video was indeed taken during a burial ceremony, the man seen lying on the ground wearing protective gear had fainted and is a relative of the deceased.

On August 23, a Facebook post that has since been viewed more than 40,000 times shared the video alongside the caption: “Meanwhile, in Kipsigis, a COVID patient was nearly buried alive. MoH has really bungled this pandemic and the best thing they could all do is resign (sic).”

In the three-and-a-half-minute recording, two people dressed in light blue personal protective equipment (PPE) are seen undressing a third person who is wearing the same protective gear and lying on the ground. It is not immediately clear what is happening from watching the video. 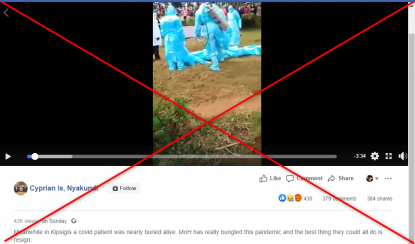 According to guidelines from Kenya’s ministry of health, corpses infected with Covid-19 are placed in tamper-proof body bags. In this video, however, the man claimed to be the deceased is wearing PPE and is not in a body bag.

Stanley Mutai, the disaster management officer in Bomet County, which is located in Kenya’s Rift Valley region, told AFP Fact Check that while the clip was recorded during a burial ceremony in one of the villages, the claims about the deceased being discovered alive are false.

“The claims are not true at all. We have been conducting burials of Covid-19 patients and lately, relatives have been requesting us to allow them to participate by carrying the coffin to the grave. At this particular funeral which took place in Chepkitwal village, one of the [families] made the request and as per standard procedure, one of the relatives had to wear the PPE,” said Mutai.

“The PPE can be quite uncomfortable for someone who is not used to them and I think that is what led to the man fainting,” he added.

Gilbert Korir, a county surveillance officer who was present during the burial, told AFP Fact Check that the man was taken to hospital after receiving first aid at the burial site.

“This particular burial took place on August 13, 2020, and the man laying on the ground is definitely not the deceased. He fainted after we carried the coffin to the gravesite. The people helping to undress him are our public health officers on the ground, who also took him to the hospital,” Korir said.