Social media users in Canada claim that the October 21 federal elections were spoiled by voter fraud, because 35 million votes were counted when Canada only has 27.5 million eligible voters. This is false: 18.5 million ballots were cast during the 2019 vote, Elections Canada, the country’s electoral agency told AFP, while 35 million refers to the number of ballots printed to avoid shortages.

“Shocking, 35 millions votes were counted but we only have 27.4 millions registered voters,” a Facebook post published a few weeks after the Canadian federal election reads. Below the text is a screenshot of the French version of Elections Canada’s website, which provides numbers on the resources deployed for Canada’s 43rd federal election. Circled in red are two numbers, 35 million and 27.4 million, next to the words “bulletins de vote imprimés” and “électeurs.” 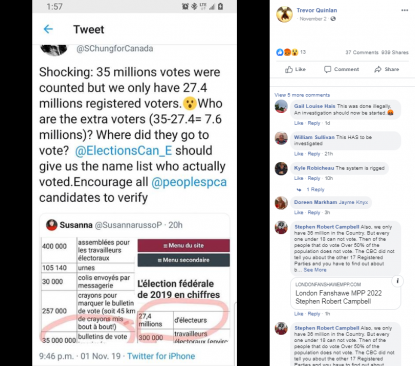 In the comments section, outraged Facebook users complain that “the system is rigged,” and that the issue “has to be investigated.”

The Facebook post was itself a screenshot of a now deleted tweet from Sarah Chung, a former Olympian turned candidate for the right-wing People’s Party of Canada in the Ontario riding of Markham-Unionville. Though Chung’s name is not included in the screenshot, her Twitter handle, @SChungforCanada, is clearly visible in the screenshots.

Chung deleted her tweet after a Twitter user pointed out that “bulletins de vote imprimés,” means “printed ballots,” not counted ballots, as the screenshot of the English version of the website below shows. 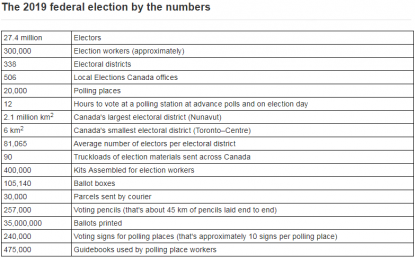 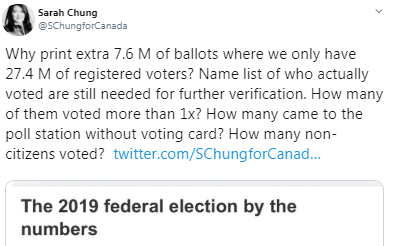 Despite the original misunderstanding, Chung tweeted again on the matter of additional ballots, this time using the English version of the Elections Canada website, and suggesting that non-citizens could have voted, or that some people could have voted several times.

Ghislain Desjardins, a spokesperson for Elections Canada, told AFP in an email, “It is essential for Elections Canada to print significantly more ballots than there are electors that will actually vote, in order to make sure that no polling location runs out.”

Desjardins explained that ballots are sent to polling stations in books of 50, and therefore a polling station requiring 202 ballots would automatically receive 250, which, at the scale of the entire country, contributes to the higher ballot count.

More ballots are also needed due to advance voting. Any unused ballots from advance polls cannot be reused on election day, according to Desjardins.

Ballots that are not used on election day “are securely destroyed by Elections Canada,” Desjardins added.

The source of the hoax seems to be Twitter user Patrick Potvin, who was the first to tweet the screenshot of Election Canada’s website, calling it a “#riggedelection with 7.8 millions illegal voters.” 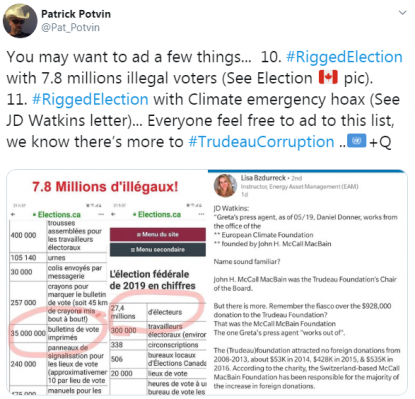 The electoral system in Canada is not foolproof. In May 2019, 103,000 non-citizens had to be removed from the voters registry after being added by mistake. Citizenship is required in order to vote in Canada and voting as a non-citizen is an offence punishable by a fine of up to $5,000 and/or six months in prison.

After the 2015 federal election, four people were charged with requesting second ballots after already voting. Here is a list of all of the charges and outcomes of cases brought under the Canada Elections Act and the Referendum Act since 2011.