This eroded water pipe was photographed in Thailand, not South Africa or Cameroon

The image of a gruesome-looking water pipe has been shared on Facebook posts suggesting it shows the poor state of water infrastructure in either South Africa or Cameroon. The image is real, depicting an eroded municipal steel pipe — but it was taken in Thailand.

Several posts in French, including ones which we’ve archived here and here, have claimed in recent months that the pipe was photographed in Cameroon.

“You can see what the water (President) Paul Biya and his wife are making you drink passes through,” said one post which was shared nearly 400 times back in June. 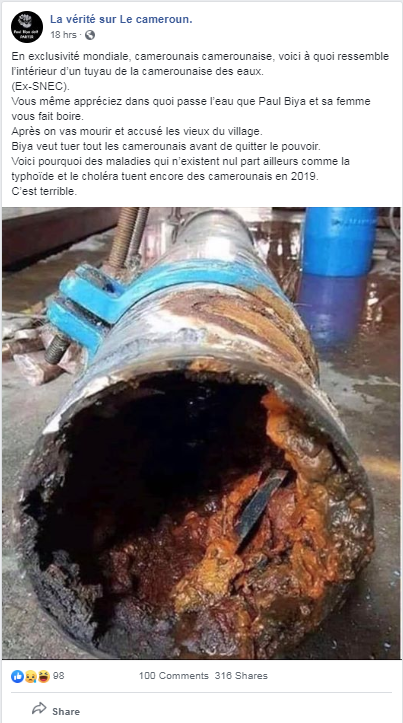 A screenshot taken on November 6, 2019 of a post claiming the pipe was in Cameroon

When we fact-checked the image in French earlier this year, we found that the photo was in fact taken in Bangkok, as seen in a 2017 Facebook post by the Metropolitan Waterworks Authority (MWA), Thailand's public drinking water company.

The Thai-language post says that the water pipeline has not been in use since April 2016, when it was removed from Lat Krabang, an eastern suburb of Bangkok. It added that the yellowish substance inside the pipeline was created over time due to particles found in water.

MWA said the water passing through the pipe was of good quality as the deposit doesn’t mix with water.

More recently, the same photo was posted in English by a water purification company based in Cape Town, South Africa, on October 29.

The caption is rather confusing and appears to have been updated after the owners of the page realised that the photo was old. 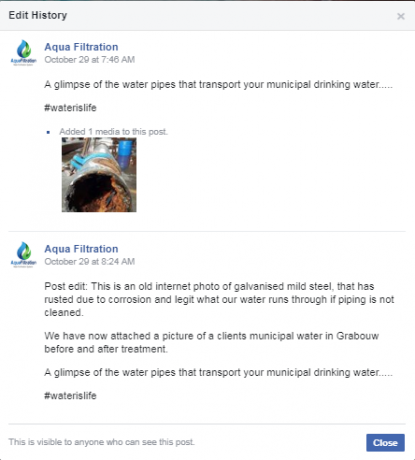 A screenshot taken on November 6, 2019 of the Facebook post's edit history

However, even the updated version could leave some readers with the impression that the pipe was photographed in South Africa.

“Post edit: This is an old internet photo of galvanised mild steel, that has rusted due to corrosion and legit what our water runs through if piping is not cleaned. We have now attached a picture of a clients municipal water in Grabouw before and after treatment. A glimpse of the water pipes that transport your municipal drinking water…..#waterislife,” reads the caption. 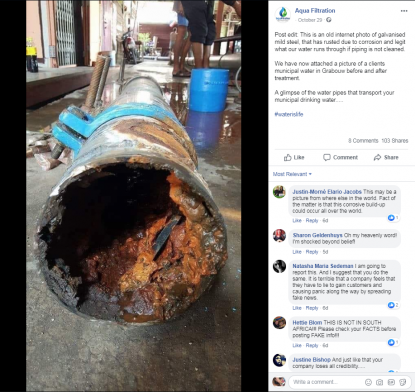 Some Facebook users had expressed shock at the photograph, while others accused the company of using a misleading image to try to garner business.

A screenshot taken on November 4, 2019 of comments on the misleading post

The confusing reference to “a picture of a clients municipal water in Grabouw before and after treatment” — which does not actually appear in the post — is perhaps explained by a second, separate post on the Facebook page, which again shows the pipe picture alongside another image of two glasses of water. 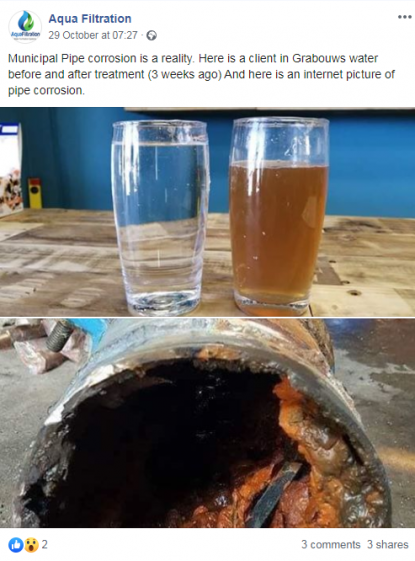 A second post by the water treatment company, which includes another picture