Celine Dion did not die in a plane crash

A website created four days ago claims that Canadian music icon Celine Dion died in a plane crash, without providing details. This is false; Dion’s talent agency told AFP the singer is alive, and the website used an altered video from CNN’s New Day program, although the US news channel never reported Dion’s death.

“Superstar and singing legend Celine Dion dead at 51,” is the headline shared hundreds of times on Facebook. Those who click on the link in their social media newsfeed are directed to a webpage where a single video seems to confirm the news.

However, the video is a cut and altered news segment from CNN’s New Day news show, which lasts just long enough for co-host John Bergman to say the words, “We have some terribly sad news to report this morning, heartbreaking, and devastating.” On the bottom of the screen, a fake news banner again proclaims Dion’s death.

The video then stops, and in order to play more online users are forced to share the link on Facebook. 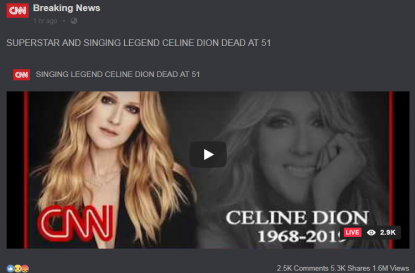 Screenshot of the false report on worldnews.hytactv.info

The report “is absolutely false,” a representative from Dion’s talent agency told AFP.

A search for the words “Celine Dion dead” yields no results on CNN’s website. The original video used in the hoax was a news segment announcing the death of US chef and TV star Anthony Bourdain on June 8, 2018.

The identical clip can be seen in this CNN special report:

Although the false report began to be shared on November 4, Dion, who is on a world tour until September 2020, sang in Detroit, at Michigan’s Little Ceasars Arena on the evening of November 5.

“Céline” tweeted a photo of herself at the concert, and fans shared moments from the concert on Twitter and Facebook.

The webpage that features the news of Dion’s death was created on November 2, 2019, according to domain identification tool Whois. This is often a good indication of a news website’s lack of credibility.

The 51-year-old singer announced she would leave her residency of 16 years in Las Vegas in June 2019, and began a world tour to showcase her new album “Courage” in her native Canadian province of Quebec in September.