A video has been viewed tens of thousands of times on YouTube and shared on Facebook and Twitter alongside a claim it shows a Filipino actress has died of “hypothyroid” disease. The claim is false; the video is a doctored version of an unrelated news report about the deaths of two other Filipino celebrities.

The video’s Tagalog-language caption translates to English as: “Actress Shaina Magdayao, Died at the Age of 30 Because of Hypothyroid Disease.”

It shows what appears to be a clip from a news report. A newsreader can be seen standing next to a screen which purports to show the message: “R.I.P. Shaina Magdayao 1989-2019”.

The final portion of the video shows a graphic of Magdayao’s photo and text that reads: “REST IN PEACE SHAINA MAGDAYAO 1989-2019”.

Shaina Magdayao is a Filipina film and television actress. 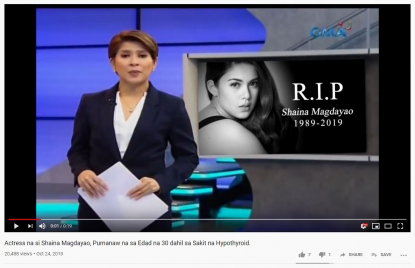 The video has been embedded in several online news articles, for example here and here, with a similar claim.

Websites which contain the video and those that redirect to it were also shared on Facebook here and on Twitter here.

The claim in the posts is false; the video is a doctored version of an unrelated news report about the deaths of Filipino celebrities Amalia Fuentes and Tony Mabesa.

Fuentes and Mabesa are icons of the Philippine entertainment industry whose careers in film and theatre spanned decades, according to this Philippine Daily Inquirer report.

This same five-second clip was looped in the misleading video.

In the misleading video, the television screen next to the newsreader has also been doctored.

Below is a screenshot comparison of the misleading video (L) with the altered graphic box and the original GMA News report (R):

In the GMA News clip, the newsreader’s comments in Tagalog translate to English as: “The entertainment industry is mourning the deaths of veteran actress Amalia Fuentes, and veteran actor, director and professor Tony Mabesa.”

Magdayao’s management team told AFP by a text message on October 31, 2019, that she is alive and called reports of her death “fake news”.

A spokesperson for her team told AFP: “It’s fake news. Thank you for reaching out to clear the false reports about her. You can check her IG account where she posted she’s alive. She’s in Vienna right now for the premiere of her Lav Diaz’s film The Halt.”

Im baaaccckkk! Or should I say, I’m A L I I I I VE ?? and oh so ready for SCORP SEASON and my 30th!!! ??♥️ ? How refreshing to be off socmed for a while. ✨ Missed you too, IG world! ?✨? Taken a few days ago for something thats coming out SOON! ♥️ Make up @rbchanco Hair @johnvalle20 Styling @rexatienza @jaysarmiento @stylelistinc Contacts @freshlookph

Magdayao also posted Instagram stories from the Viennale International Film Festival, which ran from October 24 to November 6, 2019, in the Austrian capital of Vienna.

Below is a screenshot of an Instagram story Magdayao posted on November 2, 2019: 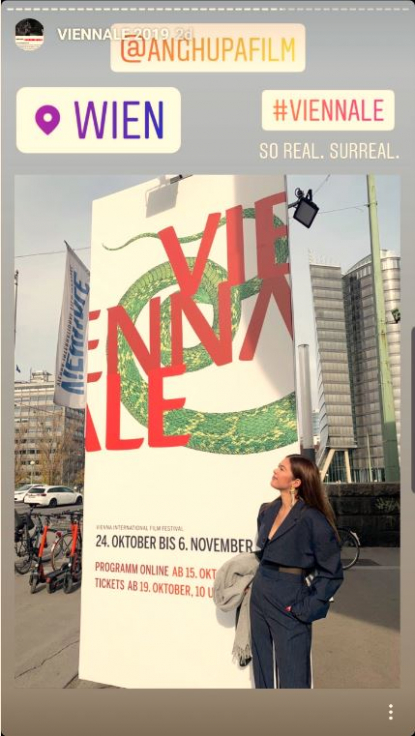 The image corresponds with the location seen in this image on Google Street View next to the Urania theatre in Vienna.