A rumor that began in late August on Twitter claims that Canada’s Liberal Finance Minister Bill Morneau is related to the Royal Canadian Mounted Police (RCMP) High Commissioner Brenda Lucki and that this is the reason why the RCMP has not investigated Prime Minister Justin Trudeau’s Liberal government’s handling of the SNC-Lavalin affair. This is false; Morneau and Lucki’s husband are not cousins, the RCMP and the finance minister’s campaign team told AFP.

It all began in late August, when Twitter users began to assert that the RCMP’s Lucki is married to a relative of the finance minister, a man named Ray Gauthier.

According to this rumor, the kinship between the RCMP boss and the Liberal minister is the reason why Canada’s top police agency did not investigate the Liberal government’s handling of the SNC-Lavalin corruption scandal, which caused controversy in Canada in early 2019.

It was revealed in February 2019 that Prime Minister Trudeau and his inner circle had attempted to pressure his justice minister into avoiding a trial on corruption charges for the Quebec based construction company.

The false connection quickly spread across other social media platforms, was converted into easily-shared memes, and was repeated thousands of times by the first week of the federal election campaign. 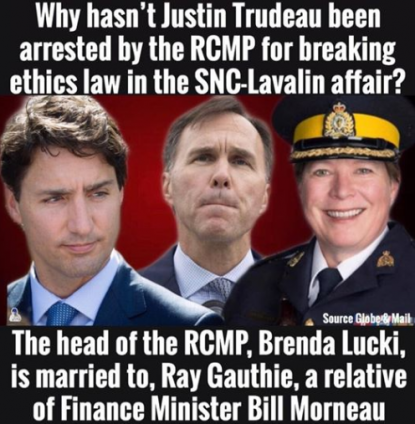 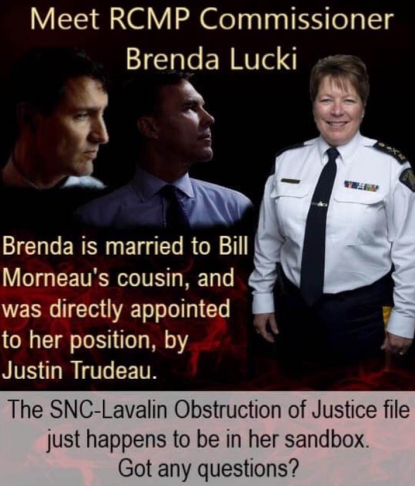 The earliest instance of the hoax that AFP FactCheck found was a tweet from the morning of August 26, when Twitter user @Cangal48 pointed out Lucki and Morneau’s family ties in response to a tweet from the now-suspended account @bgirl0001.

Commissioner Lucki is indeed married to a retired RCMP sergeant named Ray Gauthier, but he is unrelated to Morneau.

“We have confirmed and the Commissioner’s husband is not related to Finance Minister Bill Morneau,” Sergeant Caroline Duval of the RCMP told AFP in an email.

“These allegations are false,” Sharan Kaur, Morneau’s campaign manager also told AFP. “This is another example of misinformation being purposely shared during the election campaign,” she added.