A video has been viewed tens of thousands of times in multiple posts on Facebook and Twitter which claim it shows a Pakistani army officer paying people to join a protest against Delhi's move to revoke Indian-administered Kashmir’s special status in August 2019. The claim is false; the video has circulated in media reports since 2017 about a protest in Islamabad.

The 36-second clip shows an army officer handing out envelopes to a group of men.

The post’s caption states: “#Pakistan exposed. Pak army distributed money to the protesters of their citizens to Join #KashmirHour.”

In the video, an army officer can be heard saying in Urdu; “This is from us, are we not with you?” as he hands out envelopes to several men. 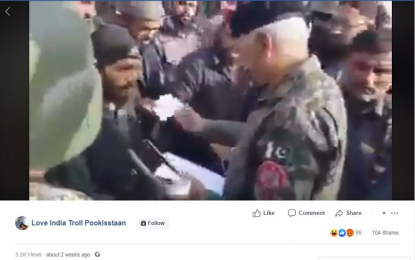 The Indian government stripped Indian-administered Kashmir of its special status on August 5, 2019, as described in this AFP report.

The claim is false; the video has circulated in media reports since 2017 about a protest in Islamabad.

A Google keyword search found the following results related to the video in the misleading posts: 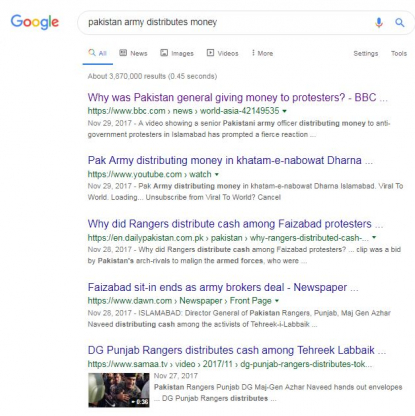 This BBC report was published about the video on November 29, 2017.

The headline states: “Why was Pakistan general giving money to protesters?”

The report states in part: “A video showing a senior Pakistani army officer distributing money to anti-government protesters in Islamabad has prompted a fierce reaction on social media.

“In the video, director-general of the Punjab Rangers Maj-Gen Azhar Navid Hayat is seen giving envelopes containing 1,000-rupee ($9.50; £7) notes to participants in the protests, who were described as having no money to pay their bus fare home.”

The BBC report stated that the video was filmed by Dawn News TV reporter Shakil Qarar on his mobile phone.

Qarar told AFP by telephone on September 19, 2019 that he shot the video himself and it was published by his channel as well as BBC.

Below is a screenshot of the video running in a Dawn News television discussion programme "Zara Hat Kay" (A little bit different) on November 27, 2017: 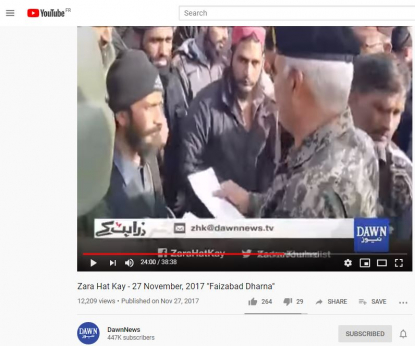 Screenshot of the video boradcast by Dawn News television

The video, posted November 21, 2017 on the official YouTube channel of Dawn News, is embedded below:

These images are actually from an Indian TV series