A video has been viewed tens of thousands of times in the 24 hours since it was published on Facebook alongside a claim it shows a fire started by Hong Kong protesters at a high-end shopping mall on Hong Kong island. The claim is false; the footage actually shows a fire at a shopping mall in Johor Bahru, Malaysia.

In the one minute, 27-second video, flame and smoke can be seen filling the central section of a shopping mall. The footage is shaky, and a person’s voice can be heard throughout on the audio. 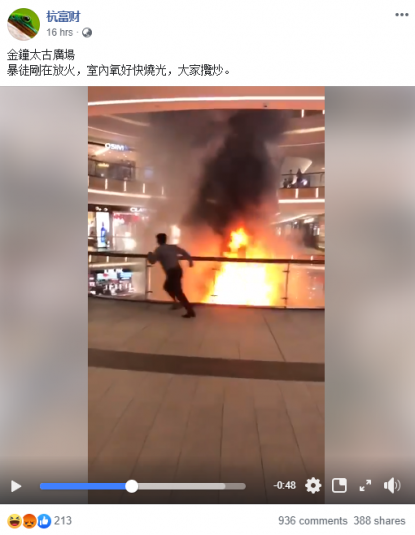 The camera later moves closer to the blaze, and a fire alarm can be heard as people are seen leaving the area.

A journalist in AFP's Hong Kong bureau analysed the footage. Some Mandarin phrases can be heard on the audio: “On the scene"; “Fire at furniture exhibition"; “Disperse the crowd”.

The misleading post’s traditional Chinese caption translates to English as: “Pacific Place in Admiralty. The mob was setting fire just now, so that the indoor oxygen could be dried out soon, and people could die together.”

Hong Kong witnessed three months of street protests which have at times become violent, including demonstrators throwing petrol bombs and setting fires in the city's streets.

The same video was published on Facebook here, here and here, alongside a similar claim.

The claim is false; the fire happened at a shopping mall in Malaysia. The cause of the blaze remains under investigation, according to the mall’s Facebook page.

The CNA article states in part: “JOHOR BAHRU: A blaze broke out at an exhibitor's display in a popular shopping centre in Johor Bahru on Wednesday (Sep 18) afternoon, setting off fire alarms.

“Firefighters were called to The Mall, Mid Valley Southkey Johor after the reports of a fire on the ground floor of the shopping centre at around 2.15pm.”

The same video used in the misleading posts can be seen here on Twitter. The footage is embedded below.

A fire took place earlier today at The Mall, Mid Valley Southkey, Johor Bahru. The fire has since been brought under control. #myedgeprop pic.twitter.com/w2XAd8ulbo

"The management of The Mall, Mid Valley Southkey, would like to confirm that an incident occurred at our premises earlier this afternoon.

"Details: A fire broke out at an exhibitor’s display at the Centre Court, Ground Floor, The Mall, Mid Valley Southkey, at around 2:14pm, and was subsequently contained by Emergency Response Team at 2:18pm. As of 4pm, we can confirm that there have been no injuries or casualties reported.

"Members of the Fire and Rescue Department of Malaysia are currently on scene, conducting all necessary investigations, and securing the premises for the safety of all present with no further disruptions to the mall operations.

"We sincerely apologise for any inconvenience caused. We would like to reiterate that the safety of our shoppers and guests remains our top priority.”

AFP found photos of the mall on its official Facebook page here and here, which correspond with the mall seen in the misleading video.

Below are two sets of comparison between screenshots from the misleading video (L) and photos from the mall’s Facebook page (R), with corresponding parts circled in red: 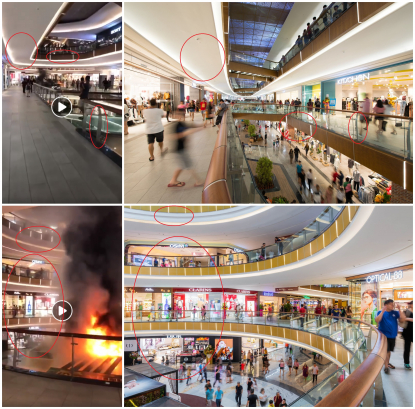 Corresponding photos can also be seen on Google Maps, such as this one and this one posted by users.

Below are screenshots of these two photos from Google Maps:

The Malaysian mall fire was also covered such as here by local newspaper The Star and here by the Malay Mail.