A blurry photo of a US passport belonging to Philippine legislator Grace Poe has been shared hundreds of times in multiple Facebook posts which claim it proves she is an American citizen and is therefore ineligible to hold public office in the Philippines. The claim is false; the photo of the passport has been taken from an old news report; Poe renounced her American citizenship in 2010 and has been ruled eligible to run for public office by the Philippine Supreme Court.

It has been shared more than 730 times.

The post's caption claims the photo proves Poe is “not a Filipino citizen” and is ineligible to hold public office.

The post’s Tagalog language caption translates to English as: “GRACE POE? This is proof that she is not a Filipino Citizen, how many elections have passed and it seems she’s just allowed and free to hold government posts. As far as I know, being a Dual Citizen limits one’s eligibility to own property or hold a post in government.” 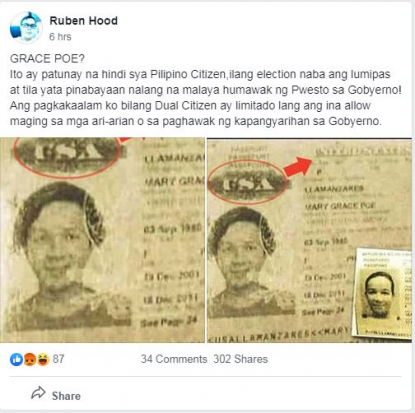 A similar Facebook post was published here on September 16, 2019, contains images of what it claims are Poe’s US and Philippine passports. 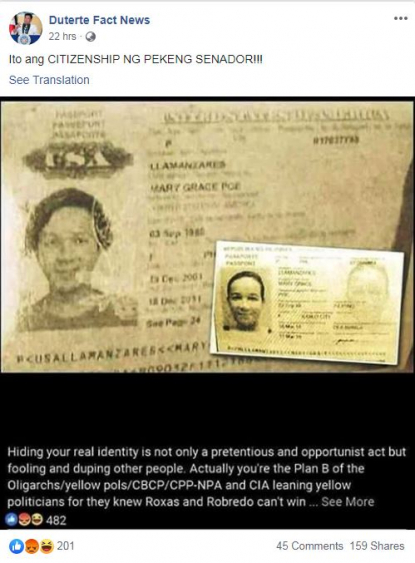 The Tagalog language text above the photos translates to English as: “This is the CITIZENSHIP OF FAKE SENATOR.”

The text below states: “Hiding your real identity is not only pretentious and opportunist act but fooling and duping other people. Actually, you’re the Plan B of the Oligarchs/yellow pols/CPP-NPA and CIA leaning yellow politicians for they knew Roxas and Robredo can’t win…”

“Yellow” is a pejorative term for members of the opposition Liberal Party.

“CPP-NPA” refers to the Communist Party of the Philippines-New People’s Army.

“CIA” refers to the US Central Intelligence Agency.

The claim in the Facebook posts is false; the photo of the passport has been taken from an old news report.

A reverse image search on Google traced found the blurry photos of the passport were published in this May 17, 2015 article by the English-language newspaper, The Manila Times. 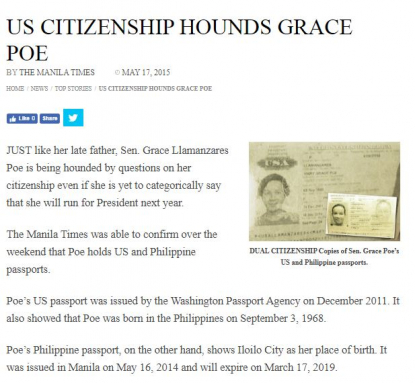 Poe, already a senator, was then running for president, as reported here by AFP.

The Philippine Supreme Court on March 8, 2016 ruled she was qualified to run for president.

It further said she obtained a Philippine diplomatic passport on Dec. 19, 2013.

Below are screenshots from the court decision: 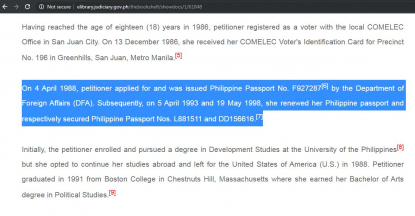 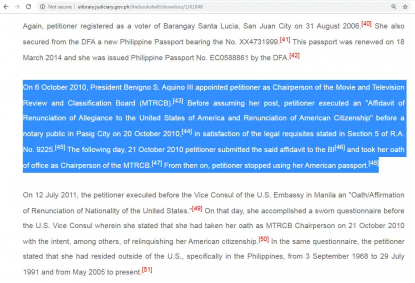 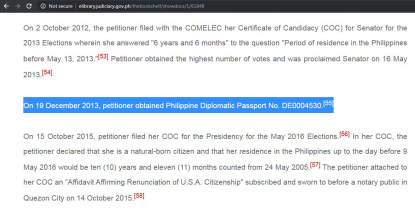 Poe topped the 2013 Philippine Senate race, lost to Rodrigo Duterte when she ran for president in 2016, and was reelected senator in 2019 placing second.