Reports widely shared on social media claim that Canada has withdrawn funding to Uganda for the purchase of four planes by Canadian aeronautics firm Bombardier. This is false: Bombardier has confirmed that the deal will still be honoured, and no evidence suggests that the government of Canada committed any money towards the purchase.

“Canada cancels funding of the planned UGANDA AIRLINES worth $180m over state brutality,” according to a Facebook post by an impostor version of private Ugandan media NBS television. 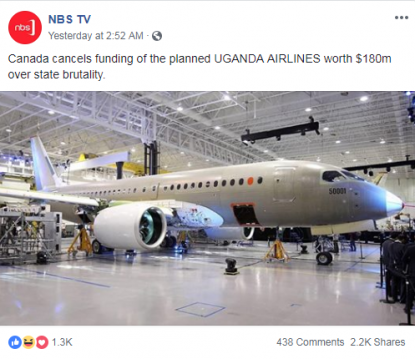 The fake post was quickly shared on social media The post is referring to is a deal struck between Canadian plane manufacturer Bombardier and the Ugandan state. The Montreal-based company announced in mid-July that it would sell four CRJ 900 aircrafts to the Ugandan National Airlines Company, in a deal worth approximately $190 million.

Bombardier Head of Communications Nathalie Siphengphet told AFP that “the order (for the planes) was not cancelled”, adding that Bombardier was “enthusiastic about delivering the planes in due course.” Bombardier did not disclose to AFP how and when payment for the planes would be made.

The Canadian government could not have withdrawn funding for the plan because no evidence suggests that it committed any public funding to Uganda for the purchase of the planes in the first place. Export and Development Canada (EDC), a Canadian export credit agency -- a governmental loan agency aimed at encouraging the purchase of Canadian products -- would have been the most likely source of public money for such a deal.

Yet Shelley MacLean, the EDC spokesperson, told AFP that “EDC was approached for financing support, but is not participating in the transaction.”

The Canadian Commercial Corporation (CCC), an organization like EDC, and Global Affairs Canada, the Canadian government branch in charge of foreign aid, both confirmed to AFP that they did not commit any funds for the deal either.

“That is hogwash,” General Edward Katumba Wamala, the Ugandan Minister of State for Works, whose ministry oversees the Ugandan National Airlines Company, told local AFP journalist Grace Matsiko about claims of withdrawn funding. Wamala did not disclose the source of funding for the planes to AFP.

NBS television, the media company impersonated, also released a statement warning their audience about the spread of the false information.

Although the most-widely shared version of this false post did not provide any more information, a less popular article published on September 11 provided more context.

According to the article on Mulengera Media, Canada withdrew funding for the four aircrafts because Canadian lawyer Robert Amsterdam called on the international community to end funding to Uganda in order to compel Ugandan president Yoweri Museveni to improve his human rights record.

Amsterdam is the lawyer of Ugandan musician and opposition MP Bobi Wine, who is currently seeking medical treatment in the United States after being allegedly tortured while under arrest in Uganda. 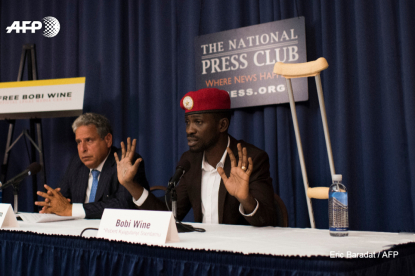 At a press conference in Washington on September 6, Amsterdam told reporters that his client and he would “contact major investors in Uganda (...) to ask them to intervene,” before adding: “We are not seeking disinvestment from Uganda, what we’re seeking is responsible investment in Uganda.”

* Note: This article was written with the contribution of Grace Matsiko, local AFP journalist in Uganda