No, these photos do not show Muslims being tortured and killed in Myanmar

A widely-shared Facebook post contains photographs it claims show Muslims who have been arrested, tortured and killed in Myanmar. Reverse image searches show some of the pictures are actually AFP and Getty Images photographs of a 2004 protest in Thailand. Another of the photographs is from a 2014 Phnom Penh Post newspaper article about alleged police torture in Cambodia.

The four photos were first shared to Facebook on January 13, 2017, with a caption saying: “Arrested, tortured and then killed: that is the fate of Muslims in Myanmar or Burma. Muslims are inhumanely slaughtered yet the world still perceives Islam as the religion of terrorists.”

The images and caption then reappeared on Facebook on September 8, 2018 and were shared hundreds of times with nearly 1,600 reactions, according to Facebook data. 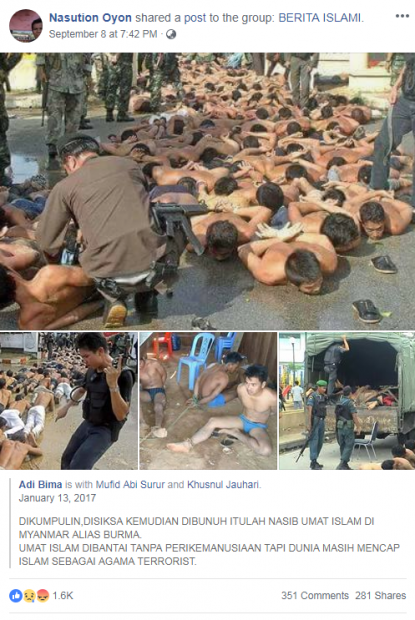 The main image in the post shows dozens of half-naked men, lying face-down on the floor with their hands behind their backs. Reverse image searches using Google and TinEye found this was actually an AFP photograph of a deadly demonstration in Tak Bai, a predominantly Muslim region in southern Thailand, on October 25, 2004.

Two of the other photographs in the misleading Facebook post are also of the same 2004 protest in Thailand -- one is a Getty Images photograph and the other was published by major Malaysian news portal utusan.com.my in a 2016 article on the incident.

The final photograph in the misleading Facebook post is, a reverse image search found, from a February 14, 2014 article by the Phnom Penh Post newspaper about alleged police torture in Cambodia.

Adhoc spokesman Seoung Sen Karona told AFP that the photograph had been taken by one of the NGO's staff in Cambodia in 2014 and was not of Muslims in Myanmar.