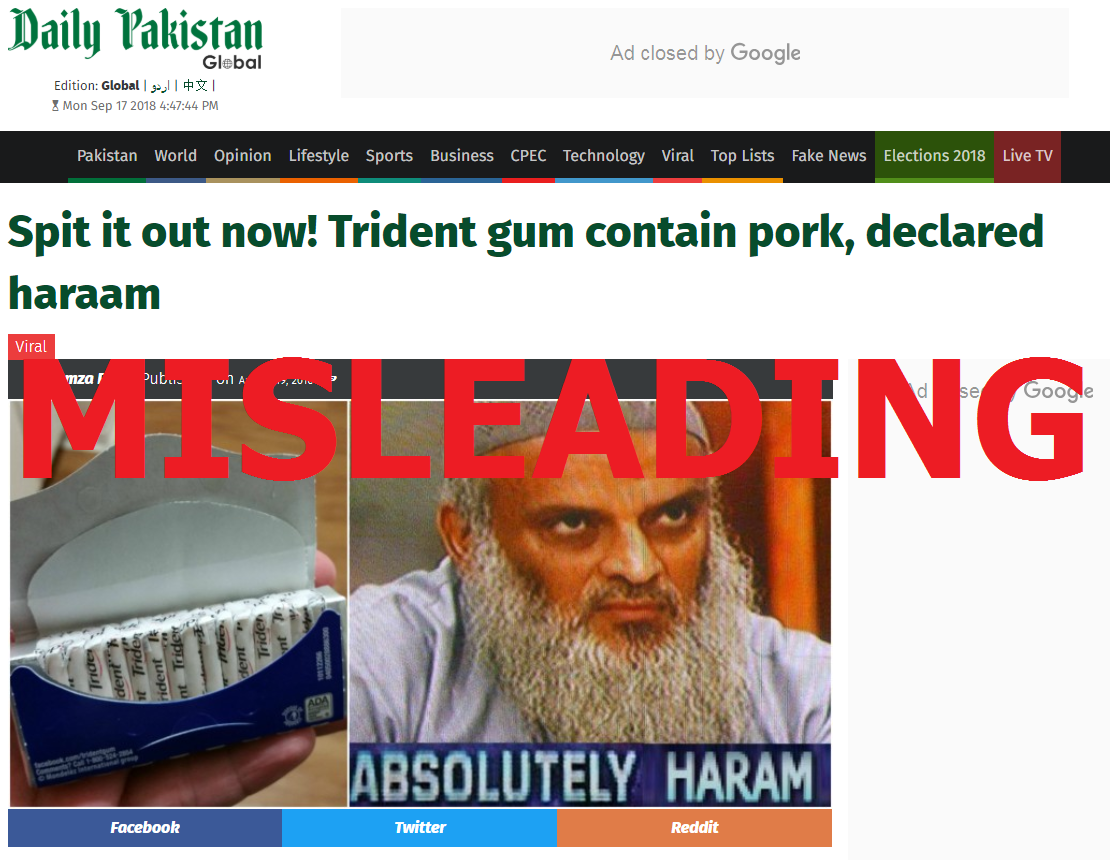 No, not all Trident chewing gum sold in Pakistan is haram

A report in a Pakistani newspaper claimed that Trident chewing gum contains pork and has been declared haram. Trident’s official distributor in Pakistan said all legitimately imported Trident chewing gum was halal certified. A regional halal product certification body said they had not declared Trident haram.

A report posted on the website of the Daily Pakistan newspaper was headlined: “Spit it out now! Trident gum contain pork, declared haram.”

“It is very likely that Trident is haram. The popular chewing gum made by Mondelez International is ‘not certified halal’,” the report said.

The report cites a purported email exchange between the company and a customer. It does not give the time, date, or full names of those involved in the exchange.

“Pork gelatin is used in the manufacturing process,” the report said, quoting a response by “Customer Relations” to a customer identified only as "Lazeena".

The story had been widely shared including by an account with some 19 million followers, according to CrowdTangle data.

Mondelez Pakistan said on it’s official Facebook page that all their products were halal certified.

Screenshot of reply from Mondelez Pakistan

“All products that are officially distributed by Mondelez Pakistan are certified Halal,” it said, adding that the gum was manufactured in Egypt and Turkey.

Other Trident chewing gum products available in Pakistan may have been imported through unofficial channels from other regions and could have different ingredients, the company said.

An official at the Punjab Halal Development Agency -- a halal certification board in Pakistan -- said that they had not declared Trident haram.

"We believe in the certification of other Islamic countries. If people are buying gum or any other imported product in the market they should look for halal certification and only buy those products,” Dr Saeed Akhtar, Senior Sharia Advisor at the agency, told AFP.

“Because other products, for instance gum, use gelatin in the manufacturing process and sometime this gelatin is made from haram animals,” he added.

The photograph used to illustrate the Daily Pakistan report is an image of a bearded Muslim cleric which has been widely used as a meme online.

An almost identical version of the Daily Pakistan's Trident chewing gum story first ran in 2016 in the Parhlo online newspaper with the headline: "This Major Imported Chewing Gum Brand May Not Be Halal!"