No, Indonesia’s president does not have to resign before running for re-election in 2019

A Facebook post claims Indonesian president Joko Widodo must resign from office before running for re-election next year. The post cites a 2008 law which requires some top officials to step down from their posts before running for president. Both the original law and a 2017 amendment clearly state that the requirement to step down does not apply to incumbent presidents.

The post says: “Jokowi is no longer a legitimate Indonesian president and must resign immediately! This is what you need to know as Indonesians: the Law No. 2008/42 on Presidential Election.” 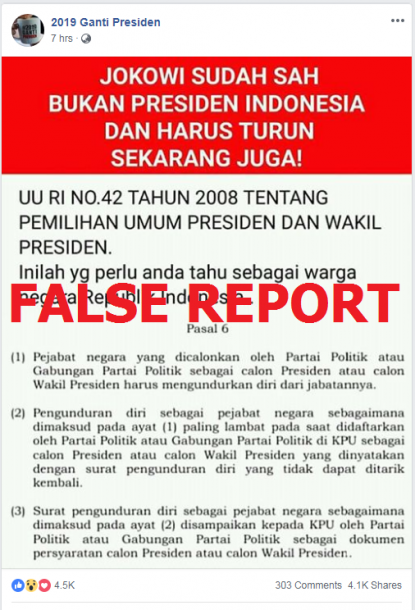 The post -- shared more than 11,000 times with some 9,000 reactions -- claims a 2008 regulation obliges all state officials to step down from their positions before running for the presidency.

Both versions of the law stipulate that certain state officials must step down from their positions to run for president.

Both versions of the law also specify that the requirement to step down does not apply to an incumbent president like Widodo.

The post appeared on the 2019 Ganti Presiden (2019 Change President) Facebook page, a group which has more than 300,000 followers and says it opposes Widodo’s 2019 re-election bid.

Arsul Sani, a spokesman for Widodo's campaign team, told AFP that the president would not resign from his position in order to run for re-election in 2019.