Various social media posts and online articles claim to show an American brother and sister who have been permitted to marry by the US Supreme Court. This is false. The photographs used in the posts show Charles Keidan and Rebecca Steinfeld, a British couple who have campaigned for the right to obtain a civil partnership in the United Kingdom rather than a marriage. Keidan described the use of the couple’s photos in the false posts as “completely wrong”. The court ruling has also been invented; across the United States, siblings are not allowed to marry.

The false claim has notably spread via various Facebook posts in Africa, including this post from Ghanian radio station Joy 99.7 FM which has been shared more than 1,000 times. We’ve archived the post here. 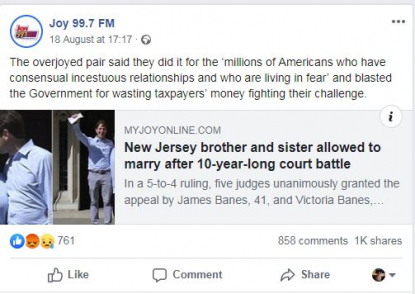 "The overjoyed pair said they did it for the ‘millions of Americans who have consensual incestuous relationships and who are living in fear’ and blasted the Government for wasting taxpayers’ money fighting their challenge," reads the caption on the Facebook post.

It included a link to an article on a website called “My Joy Online” about a brother and sister, James and Victoria Banes, who “have won the right to marry after a landmark ruling by the Supreme Court of the United States”. That article, archived here, has been shared more than 3,000 times on Facebook via various accounts, according to data from social media analysis tool CrowdTangle. 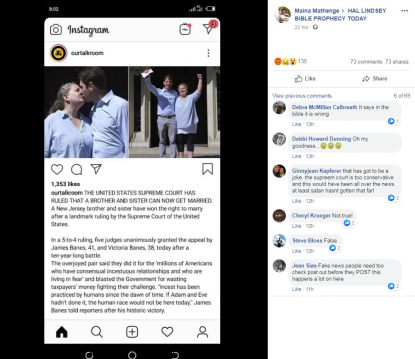 The false story has also been circulating via an Instagram screengrab

While we’ve as yet been unable to confirm the original source of the false story, another version appears on a satirical website that uses the tagline ‘MOST SAVAGE NAME IN SATIRE NEWS’. This version has been shared more than 16,000 times, according to CrowdTangle data. The story also appeared on World News Daily Report, another “satirical” website which has been the source of various viral claims fact-checked by AFP.

The pictures show a British couple who are not related

A reverse image search led us to various news articles from 2018 reporting on the legal victory of Charles Keidan and Rebecca Steinfeld, a British couple who have been campaigning for the right to celebrate their relationship with a civil partnership rather than a marriage. You can see the photos on Britain’s Mail Online website, for example, and one of them here on the CNN site. 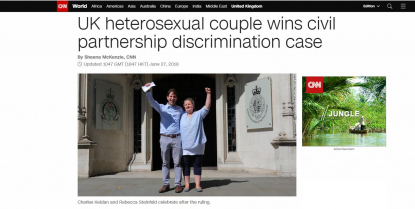 Screenshot taken on August 26, 2019 of CNN's story about the British couple fighting for a civil partnership

Keidan and Steinfeld argued that heterosexual couples should also be able to choose between a marriage and a civil partnership. They argued that marriage had “treated women as property for centuries” and that a civil partnership was, for them, preferable. As detailed on the Equal Civil Partnerships campaign website, Keidan and Steinfeld launched a legal case over the issue in late 2014 which eventually ended up in the UK Supreme Court in 2018.

While the Supreme Court agreed with the couple that they should be able to choose between the two types of union just like gay couples, UK law currently remains unchanged. The Guardian newspaper reported in July that ministers are still considering how to expand civil partnerships following the court case.

Keidan told AFP that he and his partner Steinfeld were still not married.

“We are an unmarried and un-related different-sex couple in the UK seeking a civil partnership,” he said in an email. He went on to dismiss the fake posts about incest in the United States, saying: “This is all completely wrong and/or referring to another case while using photos of us.”

The term “incest” generally refers to sexual relations between close family members, and American laws on this issue vary between jurisdictions within the country. Many states outlaw sexual relationships between siblings and between parents and their children, and no state allows siblings to marry. In some states, such as Oklahoma, such relations are punishable with prison sentences. In New Jersey and Rhode Island, it is not a criminal offence for two siblings to have a consensual sexual relationship, but they would still not be allowed to marry.

As for the supposed Supreme Court ruling in favour of a brother and sister called James and Victoria Banes, it never took place. A search of the US Supreme Court website returned no results about a case involving a “James Banes” or “Victoria Banes”.