Posts circulating on Facebook and WhatsApp claim to show protesters attacking a senior Nigerian politician while he was seeking medical care in Germany. The videos have been viewed tens of thousands of times in Africa, reflecting anger over accusations that wealthy politicians use state-of-the-art medical facilities abroad while failing to invest in healthcare at home. But the politician seen in the video wasn’t attacked over medical care at all. Senator Ike Ekweremadu was attacked at a German conference centre, not a hospital. A Nigerian separatist group has claimed responsibility for the August 17 attack, saying it was retaliation for his support for a crackdown at home.

Posts accompanying the video of a man being pelted with eggs and dragged out of a building by an angry crowd variously claim it shows Nigeria’s “vice president” or “vice president of the Senate” getting attacked over medical treatment.

“Nigerian Vice President went to Germany for treatment, his countrymen block him from entering the hospital asking him to return home and use the same facilities as other Nigerians. If he doesn’t like them, they’ve asked him to use the same taxpayer funds they steal and upgrade the facilities for all at home,” said one post doing the rounds on WhatsApp in Nigeria and Kenya. 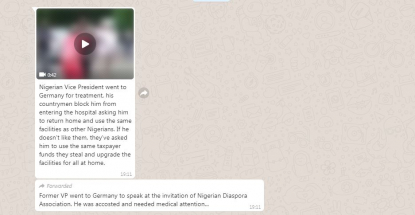 The video as circulated on WhatsApp. The accompanying message claims it shows Nigeria's vice-president being attacked for seeking medical care in Germany

A similar video, archived here, has been seen more than 38,000 times on Facebook since it was shared by a Kenyan account on August 22.

Its caption said: “Arrived in Germany for medical care, the vice president of the Senate of Nigeria is beaten by his compatriots who ask him to return to the country. You want better care !!! We too want some. Build 5-star hospitals to benefit everyone. You are not asked to do it from your pocket, full of money from the people that you steal from us every day. Do it with the budgeted money. Otherwise we die together.”

The same video was posted with a French caption by a Facebook user in Burkina Faso, similarly claiming to show the vice-president of the Nigerian senate being attacked by his countrymen for seeking medical care in Germany.

The misleading posts hit home among African Facebook users for whom tales of powerful politicians travelling abroad for medical care, rather than using the facilities at home, are familiar.

This politician is not Nigeria’s vice-president, and he was not attacked over medical care

The videos show several people manhandling Ekweremadu as he attended a conference for the Nigerian diaspora in southern Germany on August 17. The Indigenous People of Biafra (IPOB) group, which is pushing for the succession of Nigeria’s southeastern regions, claimed responsibility for the incident. IPOB, which is banned in Nigeria, said its members targeted Ekweremadu over his support for a government crackdown on its activists.

The attack took place outside a conference centre in the southern city of Nuremberg, where Ndi-Igbo Germany, a Nigerian diaspora cultural association, had organised a day of celebration of Igbo culture. Ekweremadu was listed as a guest of honour on the event invitation. Ndi-Igbo Germany later apologised to the senator for the attack:

The incident was widely reported by the Nigerian media, and there is no record of Ekweremadu being attacked for seeking medical care abroad. We fact-checked another claim relating to the incident here.

Ekweremadu returned to Nigeria less than 48 hours later and has said he is “hale and hearty”.

You can read his statement on the incident on Facebook here.