A video showing a group of women wailing while men carry a coffin has been viewed more than a million times on Facebook alongside a claim it shows “ongoing atrocities and oppression” in Kashmir -- the Facebook post was uploaded days after India stripped Kashmir of its special status August 5, 2019. The claim is misleading; the video has circulated online since 2018 and shows the funeral procession of an Indian policeman.

The two-minute and eight-second video was shared here in a Facebook post on August 8, 2019, and it has been viewed over 1.9 million times and shared 73,000 times since. 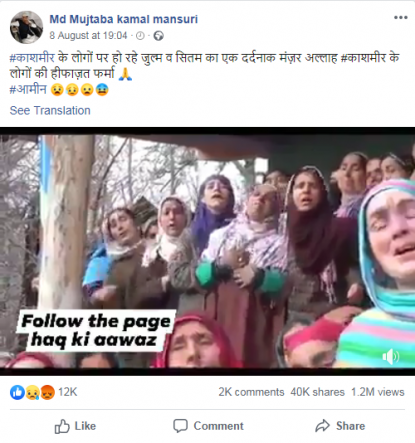 The video has also been shared elsewhere on Facebook after the Indian government abolished the special autonomy of Jammu and Kashmir state on August 5, 2019, for example here, here, here.

But the claim is misleading; the video actually shows women attending a funeral for a policeman who was killed in an attack by militants in the Soura locality in Srinagar, Kashmir, in February 2018.

The video is titled: “Kashmir- Hundreds attend funeral of cop killed by militants.”

The video description says: “Hundreds of people mourned and joined the funeral procession of a policeman Farooq Ahmed of Keegam, Shopian who was shot dead by Militants at the residence of Huriyat leader Fazal Haq Qureshi yesterday.”

Hurriyat is the united front of separatist organisations in Indian-administered Kashmir, while Fazal Haq Qureshi is a leader of the organisation.

Below are screenshots of the video in the misleading post (L) and the YouTube video posted on February 25, 2018 (R): 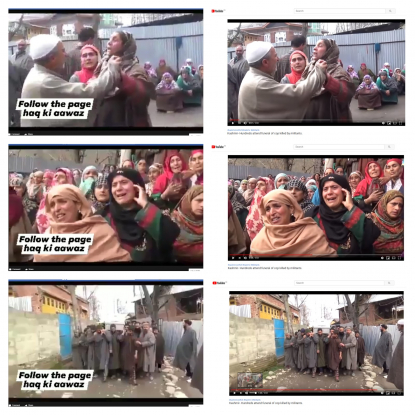 The killing of the policeman in Kashmir on February 25, 2018, was reported by multiple media outlets, such as this one by India Today and this one by the Economic Times.

Shopian is a district in Kashmir. Here is its official website.

The first three paragraphs of the report read:
“Farooq Ahmad Yatoo, the slain policeman, who was killed in Soura attack on Sunday evening, was laid to rest at his native village, Keegam area of Shopian district on Monday morning.

“The funeral was attended by hundreds of locals and his sobbing relatives.

“Farooq was killed on Sunday evening, when militants fired upon him in Soura area of Srinagar where he was guarding the residence of Hurriyat (M) leader, Fazal-Haq Qureshi. The assailants also snatched the service rifle from the cop before fleeing from the spot.”

Rising Kashmir also posted this video of the policeman’s funeral, shot from a different angle, on its YouTube channel.