Social media posts and articles shared thousands of times criticize President Joe Biden and First Lady Jill Biden for not wearing masks while visiting former president Jimmy Carter and his wife. But both couples are fully vaccinated, and guidance from the US Centers for Disease Control and Prevention says not wearing masks during such a meeting is permitted and would likely be low-risk.

“Dude! Jimmy Carter is dang near a hundred years old! Where is your mask! Then you put it on when you go outside? Come on man!!!” radio talk show host James T Harris said in May 4, 2021 posts on his Facebook and Instagram pages. 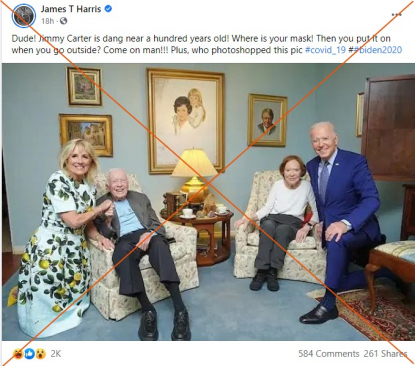 Similar posts appeared elsewhere, and the decision by the Bidens to go without masks was also questioned by Breitbart, the website of The Sara Carter Show, and Fox News host Tucker Carlson.

Carter, 96, is the longest-living president in American history, and has suffered a series of health issues that led to multiple hospitalizations in 2019. Biden, 78, is the oldest to take the position. The Bidens met Carter and his wife Rosalynn, 93, at their home in Plains, Georgia on April 29.

The photo which spread on social media was issued on official accounts of The Carter Center, the charity founded by the 39th president and his wife, as well as the Jimmy Carter Presidential Library.

She added: “The Carters were both fully vaccinated earlier this year.”

The former president is seen here with his CDC vaccination card in a screenshot from an ad he and his wife appeared in with other former presidents and first ladies to promote inoculation against the coronavirus.

Biden and his wife received their first shots in December 2020 and video showed the president getting his second vaccination on January 11, 2021. A day later, the first lady also received a second jab, her press secretary Michael LaRosa told AFP.

AFP asked the Centers for Disease Control and Prevention (CDC) whether age makes any difference in its guidelines for fully vaccinated people, in light of the suggestion on social media that it was unsafe for the Bidens to go unmasked in the presence of the elderly Carters.

“There is... emphasis on the fact that in this instance ALL the people involved are fully vaccinated, regardless of age,” said CDC spokeswoman, Kristen Nordlund.

The CDC issued new guidance on April 27 -- two days before the Carter-Biden meeting -- for people who have completed their inoculations against the coronavirus. It says that they can “gather indoors with fully vaccinated people without wearing a mask or staying six feet apart.”

She added it is also important to remember that the “current vaccines are effective.”

Outdoors, CDC guidelines say fully vaccinated people can gather or conduct activities “without wearing a mask except in certain crowded settings and venues.”

As stated in social media posts and confirmed by this AFP photo, Biden did wear a mask outside the Carter residence.

In response to criticism that Biden is not following the CDC’s latest mask guidelines, White House senior advisor Anita Dunn told CNN that he takes the recommendations “very seriously.”

She added: “We do take some extra precautions for him because he is the president of the United States.”

Regarding suggestions on social media that the Biden-Carter photo appeared to have been manipulated, because of the size differences between the subjects, AFP sent messages to the Twitter and Instagram accounts of White House photographer Schultz.

He did not respond, but this Washington Post video explains how a wide-angle lens can lead to image distortion.

AFP has debunked other claims about Biden and masks here.