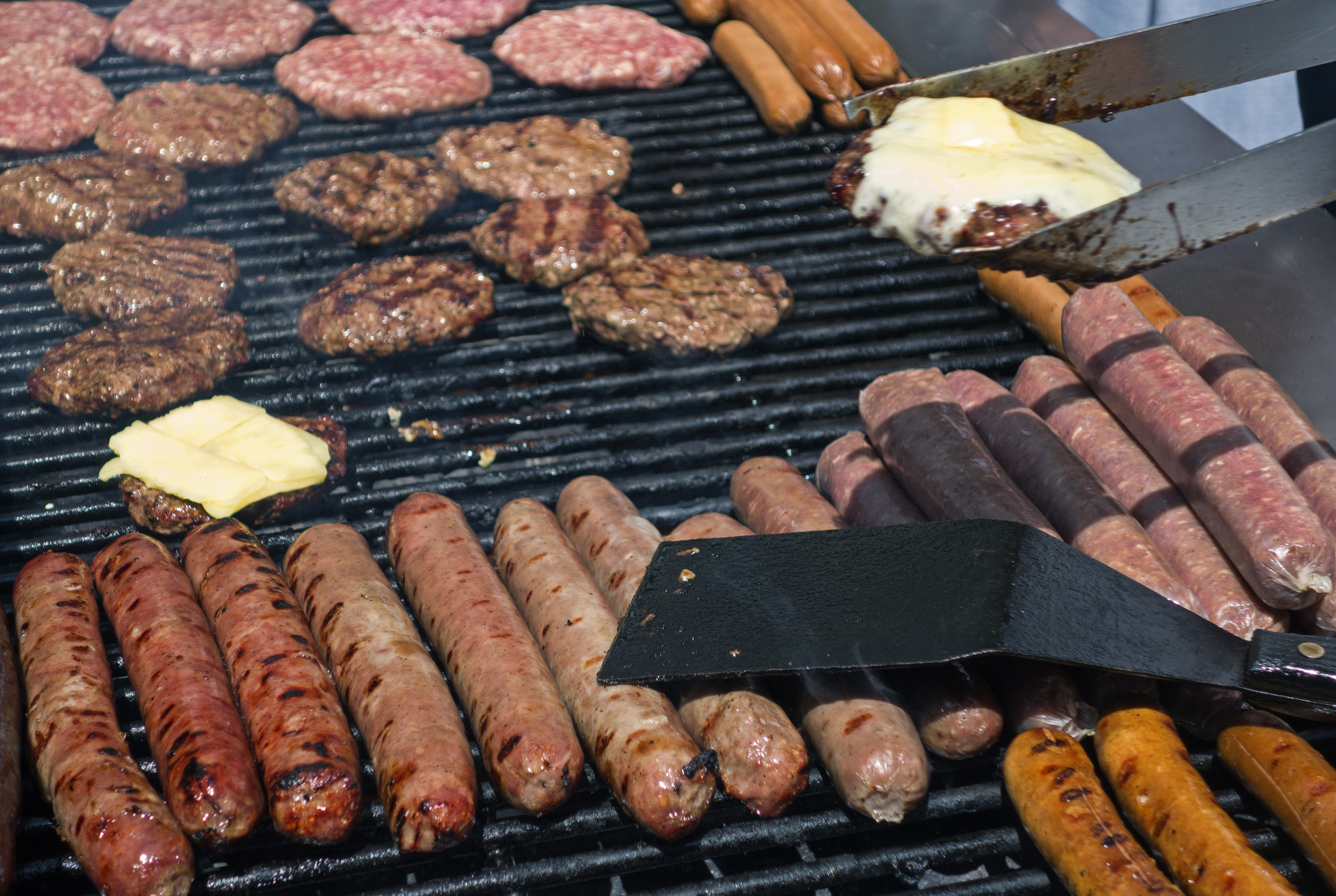 Hamburgers and sausages are grilled at a farmer's market in Washington, DC in 2013 (AFP / Paul J. Richards )

Biden’s climate plan does not target US meat consumption

Republican politicians, pundits and media reports claim that President Joe Biden’s climate plan would require Americans to cut red meat consumption by 90 percent. But the figure comes from a study published more than a year before Biden took office, authors of which said dietary changes are not needed to meet climate goals, and the president’s plan makes no mention of US eating habits.

“Joe Biden’s climate plan includes cutting 90% of red meat from our diets by 2030. They want to limit us to about four pounds a year. Why doesn’t Joe stay out of my kitchen?” Republican Representative Lauren Boebert tweeted on April 24, 2021, two days after the president’s announcement that the United States aims to halve greenhouse gas emissions from 2005 levels by 2030.

Republican Representative Marjorie Taylor Greene followed suit with a photo of Biden with a hamburger, calling him “The Hamburglar.” 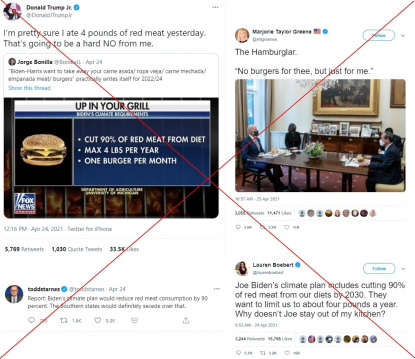 An April 23 segment of “America Reports” on Fox news, which is not available on the channel’s website, but has been archived here, made a similar claim.

“Say goodbye to your burgers if you want to sign up for the Biden climate agenda, that’s the finding of one study,” co-host John Roberts claimed in the segment, before interviewing Fox News pundit Larry Kudlow, who previously made an almost identical claim on his own show.

Roberts has subsequently acknowledged on air that the claim was inaccurate.

A graphic from the video was shared as a screenshot on social media and spread by Donald Trump Jr, who tweeted on April 24: “I’m pretty sure I ate 4 pounds of red meat yesterday. That’s going to be a hard NO from me.”

Americans will have to “CUT 90% OF RED MEAT FROM DIET,” down to “MAX 4 LBS PER YEAR,” or “ONE BURGER PER MONTH,” the graphic says. 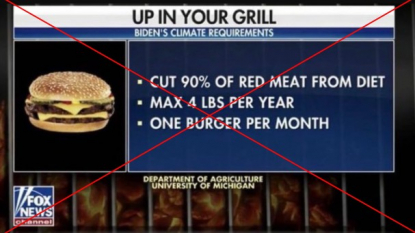 However, Biden’s climate plan does not call for putting America on a meat diet.

The figures cited in the Fox segment come from an April 2020 study by researchers from the University of Michigan and Tulane University, seven months before Biden was elected.

Titled “Implications of Future US Diet Scenarios on Greenhouse Gas Emissions,” it looked into the impact of different dietary changes for Americans on greenhouse gas emissions.

“To our knowledge, there is no connection between our study and Joe Biden’s climate plan,” Gregory Keoleian and Martin Heller, two of the study’s authors, told AFP in an emailed statement.

“This appears to be an association made erroneously by The Daily Mail that has been picked up widely,” they added.

The Daily Mail, a UK-based newspaper, appears to have been the first media to associate the 2020 study with Biden’s climate plan, in an article published on April 22, the same day the US president announced his emissions targets.

However, Keoleian and Heller said that their “study merely identifies opportunities for emissions reductions that are possible from changes in our diet. By no means does it suggest that these changes in diet would be required to meet climate goals.”

Their statement adds that the research was conducted under the University of Michigan’s Center for Sustainable Systems, not its “Department of Agriculture,” as suggested by the Fox News screenshot.

During a call with reporters on April 26, Agriculture Secretary Tom Vilsack addressed the issue, and said: “There is no effort designed to limit people’s intake of beef coming out of President Biden’s White House or USDA.”

And US Department of Agriculture spokesman Matt Herrick said by email of the claims: “This is a fabrication. There is no such effort or policy that exists by this Administration. It’s not a part of the climate plan nor the emissions targets. It is not real.”

Biden’s emissions reduction pledge came ahead of a two-day virtual Earth Day summit, but did not include a specific roadmap or allocated funds, leading to skepticism over its achievability.