This photo shows a rock creation, not a petroglyph in British Columbia

Social media posts claim that an aerial photo shows ancient petroglyphs in Vancouver, British Columbia. But the image was taken near Nelson, BC, hundreds of kilometers from the west coast Canadian city, according to the drone operator who shot it, while local experts said it does not depict a petroglyph, and the formation is similar to labyrinths created in modern times around the Nelson region.

“Ancient underwater petroglyphs discovered by a drone in Vancouver Canada,” claims an April 8, 2021 Facebook post. The same picture has been shared thousands of times since 2015. 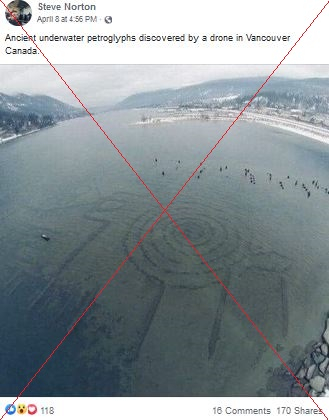 Facebook users commented with links to blog articles claiming that the picture first appeared in a January 2013 post from a photographer showing off test shots from his new consumer drone. 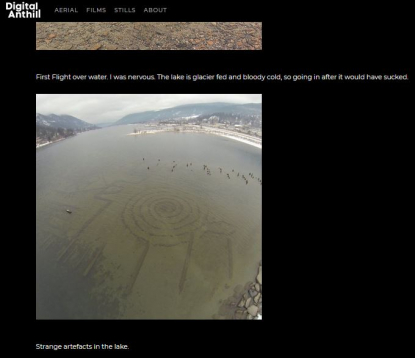 Screenshot taken from digitalanthill.com on April 26, 2021

Contacted by AFP, Rob Antill, the drone operator, confirmed in an email that the picture “was shot in Nelson, BC around that time.”

Nelson is located in the Kootenays region of British Columbia, hundreds of kilometers east of Vancouver.

Screenshot of an itinerary between Vancouver, BC and Nelson, BC, taken from maps.google.ca on April 26, 2021

“I don't believe they are petroglyphs. Just stone art work created in the summer by people when the (Kootenay) lake water is lower,” Antill said.

Michael Blake, professor emeritus in the University of British Columbia’s Department of Anthropology, confirmed in an email that the artifact shown in the drone picture “is not a petroglyph.”

He added that “petroglyphs are images carved on or pecked into rock surfaces.” Hundreds of examples of these traditional First Nations carvings can be found in archeological sites around the westernmost Canadian province.

His colleague at the University of British Columbia, R.G. Matson, suggested in an email that “it would be a rock alignment art rather than petroglyphs”, which would be a lot older and in a worse condition.

A local Facebook page also shared the picture when it achieved internet fame in 2015.

Several such stone circles were erected around Nelson in the modern era. The history behind these creations can be traced on local websites.