Skip to main content
A man is vaccinated against Covid-19 by a health worker in a remote area of Moju, Para state, Brazil on April 16, 2021.

A video showing health workers singing in an empty hospital ward has been shared tens of thousands of times on Facebook alongside a claim it portrays the “truth” of the coronavirus pandemic in Brazil. The claim is misleading: the clip shows a wing of a hospital in Brazil, which was treating more than 70 patients for Covid-19 in other wards. In the city where the video was filmed, the occupancy of adult intensive care beds was 93% at the time the video was recorded.

The claims were shared by a New Zealand-based political party Advance NZ here on April 22, 2021. The video has been viewed more than 7,000 times. 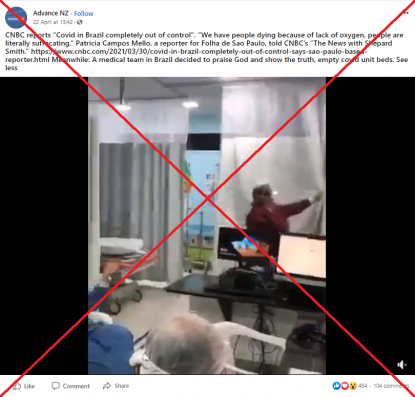 The video shows a health worker walking around a hospital ward. She can be seen pulling open the curtains to reveal empty beds, as her co-workers sing a religious song, Porque El Vive ("Because He Lives"), in Portuguese.

Brazil has struggled to contain Covid-19, recording more than 14 million cases since the outbreak began in March 2020, according to Johns Hopkins University statistics.

The outbreak has claimed the lives of more than 390,000 people in Brazil, and led to widespread poverty in the developing nation.

Despite the situation, the video's caption attempts to cast doubt on Brazil’s coronavirus crisis.

The caption reads: “CNBC reports ‘Covid in Brazil completely out of control’. ‘We have people dying because of lack of oxygen, people are literally suffocating,’ Patricia Campos Mello, a reporter for Folha de Sao Paulo, told CNBC’s ‘The News with Shepard Smith’.

The video has been shared by social media users around the world, including in Australia, Paraguay, Poland and Romania alongside a similar claim.

At the video's 15-second mark, a poster affixed to a computer screen on the hospital ward appears to show the logo for Brazillian medical insurer Unimed.

A screenshot comparison of the logo found in the ward of the hospital featured in the video and the Unimed logo found on their website, taken April 29, 2021.

In response to an AFP request, Unimed said the video was recorded in their Alberto Urquiza Wanderley Hospital. It is situated in the coastal city of João Pessoa, capital of the northeastern Brazillian state of Paraíba.

The video was filmed in one of the hospital’s intensive care units during a night shift from March 30 to 31 in a “momentarily favourable scenario”, a company spokesperson said.

“After an increase in cases of Covid-19, there was a reduction [in cases], which, at that time enabled [this] ICU to be without patients”, the spokesperson told AFP. “The use of this video in any other context that seeks to misrepresent the fact itself is biased and not true.”

The scene shown in the video was only possible, according to Unimed, because the Alberto Urquiza hospital follows a “contingency plan” which means the number of beds in an ICU ward can be increased or decreased depending on the number of patients.

In contrast to the claims made by Facebook users sharing the video, ICU beds reserved for coronavirus patients in Greater João Pessoa were nearly all occupied at the time the video was filmed.

On March 31, 85 percent of ICU beds reserved for Covid-19 patients in the state were occupied, while 86 percent were occupied in Greater João Pessoa.

On April 22, the Paraíba Secretariat of Health said in this Facebook post it had recorded a slight decline in serious coronavirus cases due to local virus control measures and the vaccination drive.

The situation, however, in other parts of Brazil remained dire in April. AFP reported on the crisis here.