Within hours of the Beirut mega blast, conspiracy theories on what caused the disaster in the Lebanese capital spread like wildfire on social media.

The August 4 detonation of an abandoned shipment of ammonium nitrate in Beirut port's Hangar 12, after an initial blast and fire, cost more than 170 lives, injured thousands and left hundreds of thousands temporarily homeless.

Images and videos were posted within minutes on social media of the atomic bomb-like explosion and its apocalyptic aftermath across the Mediterranean metropolis.

In the absence of clear-cut answers and pending the results of an official investigation, some posts have served to feed disinformation.

A video showing a missile in the sky was quickly touted as proof of an attack by Lebanon's former wartime enemy and neighbour Israel.

But verification by AFP Fact Check (article in French) shows the missile image was digitally pasted into the video, after several earlier posts of the same footage which showed no such projectile. 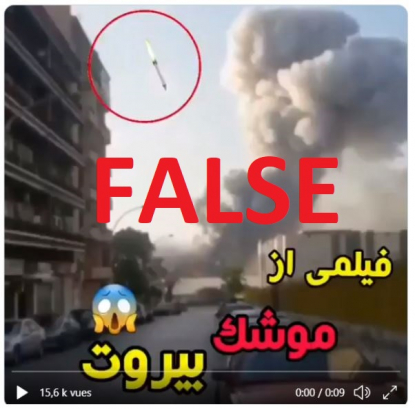 A separate post of a rocket crashing into another site in Beirut port is marked as "filmed by thermal camera".

But a filter was found to have been added to the footage and a missile inserted. 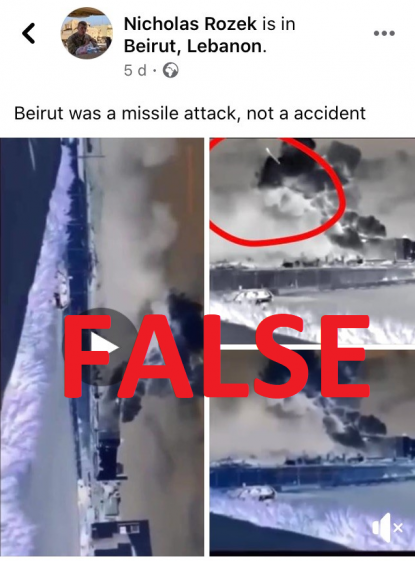 To back up the finger-pointing at Israel, with which Lebanon technically remains at war, online videos allegedly show a drone dropping an unidentified object over the port, seconds before the blast.

It has been authenticated but with no connection to August 4, and linked in fact to Israeli drones over south Lebanon days earlier, according to several local media (including here and here).

A photograph of Israeli Prime Minister Benjamin Netanyahu holding a map of Beirut to indicate the port has been added to the mix.

But the picture dates back to September 2018 and shows Netanyahu at the UN General Assembly condemning alleged "secret sites" of the Lebanese Shiite movement Hezbollah.

He was pointing at a zone near Beirut international airport, several kilometres (miles) away from the port. The Beirut blast created a crater 43 metres (140 feet) deep, according to a Lebanese security source, citing an assessment by French experts in pyrotechnics.

But doctored photographs have cropped up on social media among the abundance of shots of actual widespread destruction across Beirut.

One shows rows of totally burnt-out "imported cars" -- an image in fact taken in eastern China's Hebei province after a 2015 blast at a chemical warehouse.

The crater it left behind is falsely identified as the scene at Beirut port. 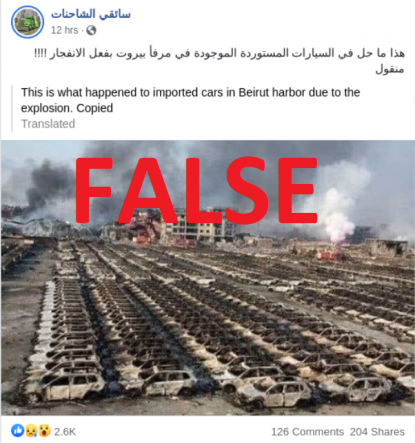 Among other rigged photos suggesting international solidarity with Beirut have been fake images of Cairo pyramids lit up in the colours of the Lebanese flag.