Skip to main content
An aerial view taken on August 9, 2020, shows a general view of the port of Beirut, the damaged grain silo and the crater caused by the colossal explosion of a huge pile of ammonium nitrate (AFP / STR)

A video shared tens of thousands of times on social media claims to show a missile strike causing an explosion that devastated Beirut, with posts alleging that the footage is “infrared” or “thermal” imaging of the blast. This is false; the missile was edited into the original video, and a filter was added to give the illusion of thermal or infrared imaging.

“Beirut was a missile attack, not a accident,” says an August 6, 2020 post by a user who claims to work for the United States military. 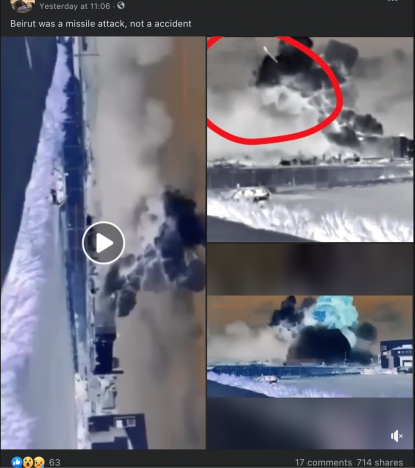 Screenshot taken on August 7th, 2020 of a post sharing the video.

The video shows large plumes of smoke rising above the port of Beirut and, around six seconds later, appears to show a missile striking the port, leading to a large explosion.

For many social media users who shared the video, it is clear evidence that the explosion in Beirut on August 4th, which killed at least 160 people and injured thousands, was a result of a missile strike.

Some users correctly describe the video as a “negative” version, a filter that makes the lightest areas of the video darkest and vice versa, while others wrongly call it “infrared” or “thermal” imaging.

Michel Aoun, the Lebanese President has said that either “negligence” or a “missile or bomb” triggered the explosion of 2,750 tonnes of ammonium nitrate -- a highly explosive substance -- stored at the port, but the exact circumstances of the blast remain unclear.

The explosion has led to protests by demonstrators who say the disaster could not have happened without the corruption and incompetence that have come to define Lebanon's ruling class.

Using InVid-WeVerify to get a frame-by-frame breakdown of the video, AFP was able to conduct a reverse image search.

The first version of this video can be found on CNN Arabic’s website, dated August 4th, 2020 with the headline “Lebanon .. A huge explosion near Beirut harbor leaves injuries, severe damage and chaos in the center of the capital.” 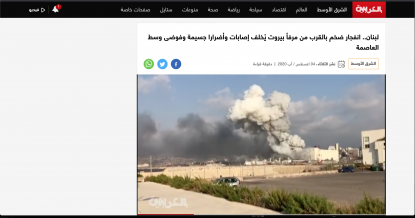 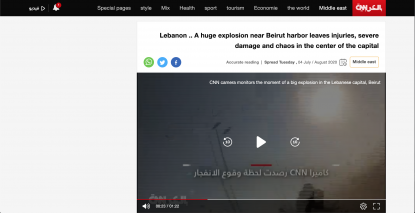 The same clip as the one shared on social media appears 11 seconds into the CNN video, though no missile is visible and no negative filter has been applied. 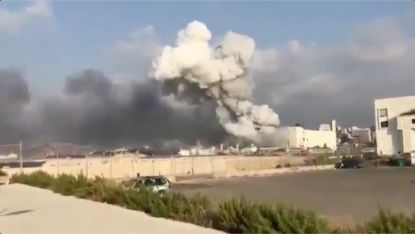 Screenshot of the original video taken on August 7th, 2020 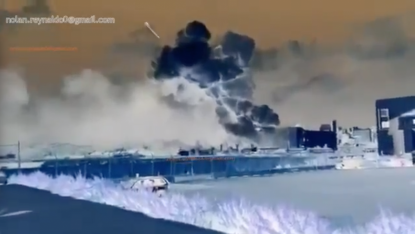 Screenshot of the doctored video taken on August 7th, 2020

Slowing the video down also shows that the alleged missile disappears, roughly seven second into the video, before hitting its target. 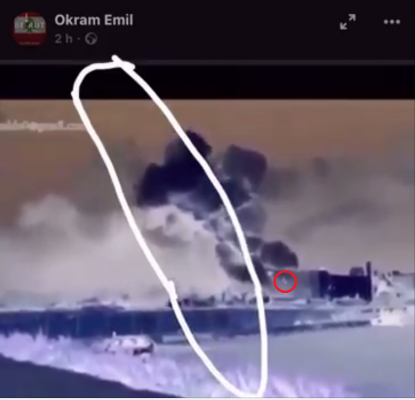 Screenshot of a Facebook version of the video taken August 7th, 2020 with the doctored missile visible 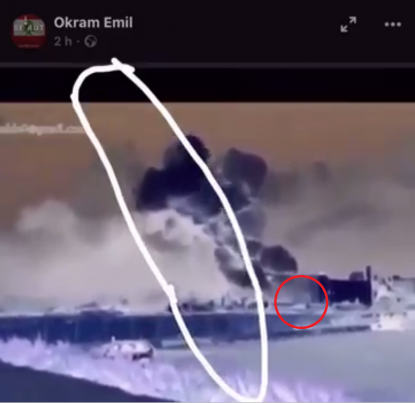 Screenshot of a Facebook version of the video taken August 7th, 2020 where the missile disappears before the explosion

Other videos of the blast, taken by multiple people and from multiple angles, do not show any missile or bomb prior to the explosion.

Twitter users created their own versions of doctored videos, adding missiles, to show how easily videos can be modified.

This user added a fake missile onto another video, also with a negative filter, of the blast.

A similar doctored video alleging a missile was the cause of the Beirut explosion spread on social media and was fact-checked by AFP in Portugese here.

Other false and misleading claims about the Beirut blast, including that it was a nuclear explosion, have been debunked by AFP and can be seen here.