A video has been viewed more than one million times in multiple posts on Facebook alongside a claim it shows a Sindhi-speaking “beggar” who illegally boarded a Bangkok-bound plane in the Pakistani city of Karachi. The claim is false; the video shows a Farsi-speaking man on an Iran-bound plane in the Qatari capital of Doha.

The one-minute and eight-second video was published on Facebook here on June 19, 2018. It has been viewed more than one million times and shared more than 29,000 times.

The post’s Urdu-language caption translates to English as:
"Breaking footage...!
"A one of its kind incident in Pakistan
"In Karachi a beggar who snuck onto an aircraft
"Astonishing situation
"Flight attendants were bewildered
"Beggar can be heard speaking Sindh language
"Can be seen begging from flight attendants and passengers: Footage
"Flight attendant tried to convince him
"A historic event of beggar gatecrashing into a foreign private airline
"He crossed many security points to reach inside the aircraft      "Security totally stands exposed
"Flight TJ 507 yesterday left from Karachi to Bangkok.
"The beggar entered after fooling the flight operation of Karachi "Jinnah International Airport: sources
"The beggar perplexed the security personnel: sources
"Civil Aviation (Authority) is trying to keep the matter quiet: sources.” 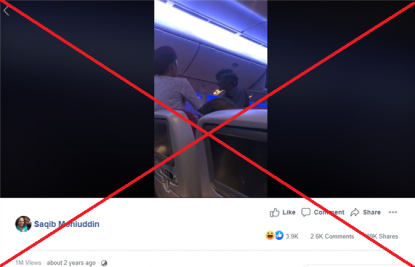 A Google reverse image search found the footage was featured in multiple reports in June 2018. They state the incident occurred on a Qatar Airways flight from Qatar to Iran. The video was published in reports here and  here by Pakistani newspapers Daily Pakistan and The Express Tribune.

At the clip's 24-second mark, it shows an inflight information screen that displays DOH (Doha) as the origin airport and SYZ (Shiraz) as the destination.

Below is a screenshot of the screen seen in the video with the flight route circled in red: 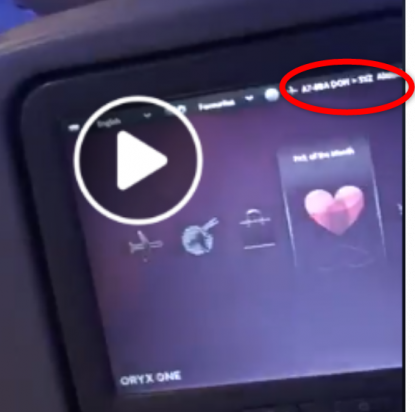 On June 19, 2018, a senior Pakistani government official and former spokesperson for Pakistan International Airlines refuted the claim the incident occurred onboard a plane in Pakistan.

“This video is made onboard a Doha-Shiraz flight. The so-called beggar, who is an Iranian deportee, speaking Farsi & the lady making the video is also speaking in Farsi. The old man was deported without any money so he was asking passengers in the plane to help him out,” the official, Danyal Gilani, said on Twitter here. 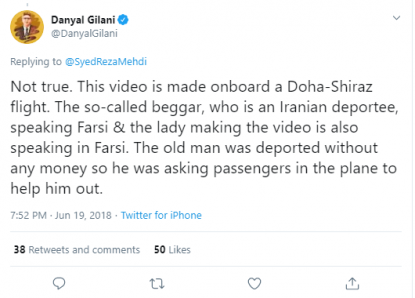 A screenshot taken on August 6, 2020, of a tweet by a Pakistani official