Facebook posts claim that a military general from the South African National Defence Force is pictured wearing the wings of the country’s parachute battalion on the wrong side of her uniform. This is false;  the badge has no connection to the South African military’s “parabats”. It was awarded for completing a senior staff course in Cuba and is correctly worn above the officer’s right breast pocket.

A Facebook post shared more than 1,000 times was posted on March 9, 2021, with a picture of an officer from the South African National Defence Force (SANDF) wearing her full uniform.

“I see this lady general in the SANDF is wearing parabat wings,” reads the Facebook post. “She must be incredibly strong and fit to have passed the rigorous training. But they forgot to tell her that you are supposed to wear the wings on the left.” 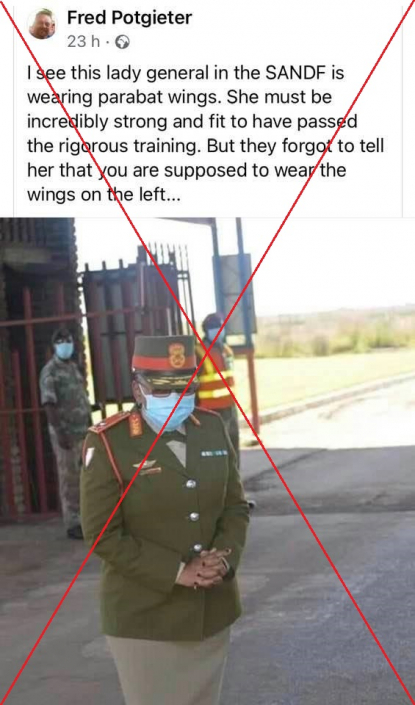 Later that day the author acknowledged he had made a mistake and updated his post.

“The lady does not wear parabat wings, it is a recognition that look like SA parabat wings received from the Cuban military for completing a senior staff course in Cuba and that is, correctly, also the reason for wearing it on the right hand side (sic),” reads part of the updated post.

SANDF paratroopers are “responsible for transporting and dispatching personnel and equipment by aircraft in support of objectives on the battlefield”.

They also perform a variety of specialised tasks, including medical evacuation and air assaults.

A photo of basic parachute battalion wings in SA saved from southafricanmilitaria.com on April 12, 2021

Who is the officer?

Contacted by AFP Fact Check, Mafi Mgobozi, spokesman for the SANDF, confirmed that the woman pictured is Brigadier-General Mafiniwase Mkhize, commanding officer of JSB Garrison, a military base in Centurion - situated between South African cities Johannesburg and Pretoria.

Mgobozi added that the brigadier-general is not wearing a parabat badge.

“This is not a Para Badge, but is a badge for a course which she attended in Cuba in 2019,” said Mgobozi. “In SANDF, we wear course badges on the right.”

Military experts Darren Olivier, director at African Defence Review, and Guy Martin, editor of Defence Web, confirmed this, stating that there is “nothing wrong” with Mkhize’s uniform.

“They're not parachute wings, but a Cuban officers' qualification badge. This ties in with her apparently completing a course in Cuba,” Martin told AFP Fact Check by email.

“The Combined Arms Specialist Badge is awarded to an officer and enlisted personnel who have successfully completed a series of proficiency tests. These badges are awarded in Master, 1st, 2nd, and 3rd class.”

According to Olivier and Martin, only officers and career enlisted personnel are eligible to receive the Master class.

“This badge is worn above the right breast pocket. If you're sent on a foreign course, officially you may wear the badge from it,” said Martin.