Skip to main content
Australia has been among the countries battling the spread of the novel coronavirus. (AFP / Peter Parks)

A claim that a doctor’s office in a New South Wales town was visited by people who had been exposed to the novel coronavirus has been shared hundreds of times in multiple posts on Facebook. The claim is misleading; health officials stated that the only confirmed coronavirus cases in the Australian state were in Sydney, not the regional areas.

The post includes a screenshot of another Facebook post, which makes the claim about a doctor’s office in Aberglasslyn, a small town about 170 kilometers (105 miles) north of Sydney.

The text reads: “Just want to let everyone know that today I had a appointment at Aberglasslyn Doctors for my 3 month old son and was told 3 Asians had been in previously that had been exposed to Coronavirus (unaware If they have it) and I was asked to wait outside, I cancelled our appointment and left. Assuming they are local so perhaps keeping small children away from public places for a while may be best." 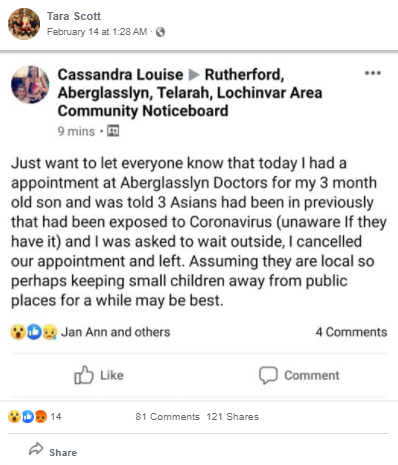 As of February 19, 2020, the Australian Department of Health had confirmed 15 cases of coronavirus nationwide. Of those, four were in New South Wales (NSW).

The four patients, all of whom were confined to the Sydney metropolitan area, have recovered and been discharged from hospital, NSW Health, the state’s health department, announced on February 13, 2020.

“There remain four confirmed cases of COVID-19 in NSW. All patients have been discharged from hospital and none was in a regional area.”

In a media release on January 25, 2020, NSW Health also made no indication that the first three coronavirus patients had travelled to the state’s regional areas.

All three patients, the statement states, had travelled from China to Sydney in January 2020 and were all isolated in hospital by the end of the month.

The fourth confirmed case was a University of New South Wales Sydney student who was diagnosed on January 27, 2020.

“The student did not attend any classes at the University and stayed on her own in campus accommodation with no close contact before she was admitted to hospital,” the university’s statement reads.