Multiple Facebook posts have shared a purported government announcement that calls for the arrest of a Chinese national from the city of Wuhan who allegedly escaped quarantine at an airport in the Philippines after the novel coronavirus outbreak. The posts have been shared hundreds of times. The claim is false; the Philippine Bureau of Immigration denied issuing the advisory and called it “a hoax”.

The post, which shows a photo of the purported escapee alongside a warning advising the public to avoid contact with the man, was published here on Facebook on February 8, 2020. It has been shared more than 550 times. 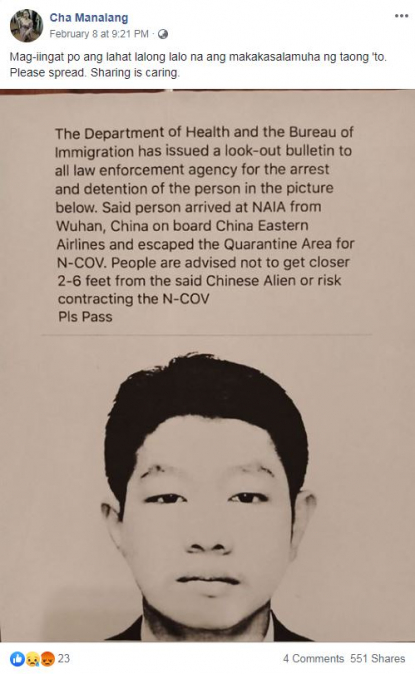 The text in the purported advisory reads: "The Department of Health and the Bureau if Immigration has issued a look-out bulletin to all law enforcement agency for the arrest and detention of the person in the picture below. Said person arrived at NAIA from Wuhan, China on board China Eastern Airlines and escaped the Quarantine Area for N-COV. People are advised not to get closer 2-6 feet from the said Chinese Alien or risk contracting the N-COV Pls Pass".

NAIA refers to the Ninoy Aquino International Airport in Manila, the Philippine capital. Following the novel coronavirus outbreak, immigration officers at the airport, and other entry points, implemented various travel restrictions and quarantine procedures for travellers arriving from China, Hong Kong and Macau.

The post’s Tagalog-language caption translates to English as: “Everyone please be careful especially if you encounter this person. Please spread. Sharing is caring.”

The image was also shared alongside similar claims here and here on Facebook.

The claim is false; the Philippine Bureau of Immigration took to Facebook to deny issuing such an advisory, calling it “a hoax”.

“The Bureau of Immigration (BI) on Sunday clarified that the story of a foreign national who allegedly escaped the quarantine area of the Ninoy Aquino International Airport (NAIA) that went viral on social media was a hoax," the agency said on February 10, 2020.

Below is a screenshot of the statement, which includes the image in the misleading post overlaid with a “FAKE” stamp seal: 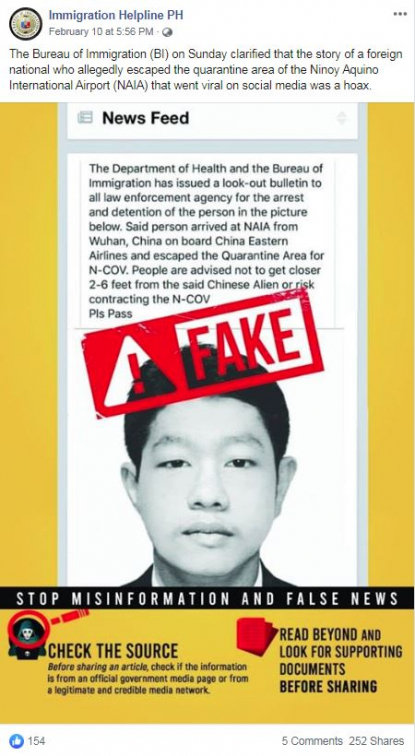 Moreover, while the misleading Facebook post claims that the Chinese man “arrived at NAIA from Wuhan, China on board China Eastern Airlines”, further research found the airline does not offer direct flights from Wuhan to Manila.

During a phone conversation with AFP on February 12, 2020, a NAIA representative confirmed that China Eastern Airlines only flies direct to and from Shanghai, and not Wuhan or any other Chinese city.

As of February 19, 2020, the Philippines has three confirmed coronavirus cases, including one death.

More than 2,000 have died from the novel coronavirus, and some 74,000 have been infected in China alone, with hundreds others confirmed infected abroad, AFP reported.