An image has been shared thousands of times in multiple posts on Facebook, Twitter and various websites alongside a claim that it is the last photo NASA’s Cassini spacecraft sent to Earth before it entered Saturn’s atmosphere. The claim is misleading; the image is actually an artist’s illustration of the view from the Cassini spacecraft.

The image was published in this Facebook post on July 2, and it has been shared more than 1,000 times after being posted by a page with more than 356,000 followers. 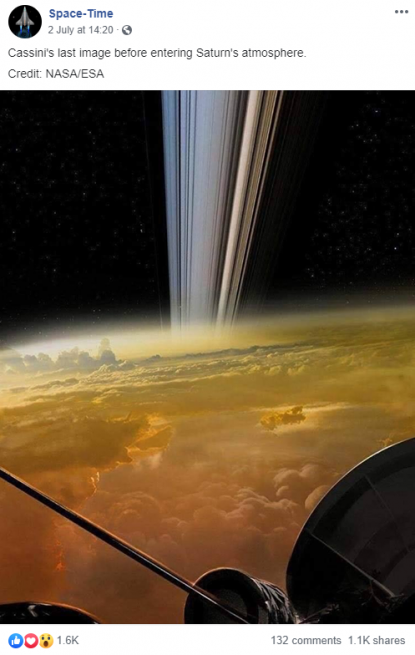 NASA announced the conclusion of Cassini’s mission in this press release published on September 15, 2017, which states, in part: “A thrilling epoch in the exploration of our solar system came to a close today, as NASA's Cassini spacecraft made a fateful plunge into the atmosphere of Saturn, ending its 13-year tour of the ringed planet.”

The same image has also been shared hundreds of times here and here on Twitter alongside a similar claim.

It was also published here on Polish social networking site Wykop and here on a Japanese blog alongside a similar claim.

The image has also been shared on various websites, including here and here alongside a similar claim.

The claim is misleading; the image is actually an artist’s illustration of the view from the Cassini spacecraft.

Reverse image searches on Google found the same image published here on NASA’s website on April 6, 2017, more than five months before the spacecraft entered the atmosphere of Saturn.

The image caption states: “This artist’s concept shows an over-the-shoulder view of Cassini making one of its Grand Finale dives over Saturn.”

Below is a screenshot of the image on NASA’s website: 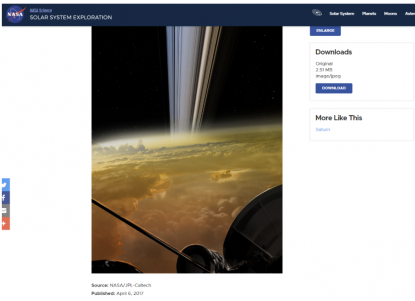 A flag for pedophiles? It exists, but it is not a push for inclusion in the LGBT community