A video has been viewed about two million times in multiple posts on Facebook, Twitter, and YouTube alongside a claim that 8,000 Hindus in India said they would convert to Islam if justice was not served for a Muslim man tortured to death in June 2019. The claim is false; the footage has circulated online since 2017 in local media reports about a teachers protest. 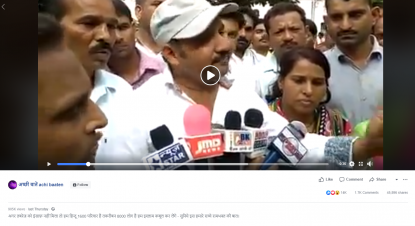 The Hindi language caption translates into English as: “If Tabrez doesn’t get justice, then we are 1,600 Hindu families with around 8,000 members and will convert to Islam. Listen to this true patriot of Lord Ram.”

“Tabrez” refers to Tabrez Ansari, an Indian Muslim who was allegedly beaten by a mob in Jharkhand state and forced to chant Hindu slogans on June 18, 2019.

He died four days after the attack on June 22, 2019. Police arrested 11 people over the killing on June 25. Here is an AFP report about the killing published on June 25.

Ram refers to a Hindu deity.

The video shows a man wearing a white cap speaking to journalists in Hindi.

The same video has been viewed hundreds of thousands of times on Facebook here and here with a similar claim, and was also shared on Twitter here.

The claim is false; the video has circulated online since 2017 in local media reports about a teachers protest.

Yogi refers to Yogi Adityanath, the chief minister of the north Indian state of Uttar Pradesh. Here is his official Twitter profile.

The protest was covered by local Hindi language site Patrika.com in this report published on July 27, 2017.

The headline of the article translates to English as: ‘Contractual teachers gave a warning to Yogi government after the order from Supreme Court.’

The person speaking in the video in the misleading posts can also be seen in this video published on the YouTube channel for local news channel Patrika Uttar Pradesh on July 26, 2017.

At the 35 second mark, he identifies himself as Manohar Singh Bundela, a resident of a town near Lalitpur district in northern India.

He lists himself as a government school teacher on his Facebook profile here.