This video has circulated in media reports about a murder in Bangladesh, not India

A video has been viewed tens of thousands of times in multiple Facebook posts that claim it shows a Muslim mob beating a Hindu to death with sticks and stones in India’s eastern state of Bengal. The claim is false; the clip has circulated in reports about a murder in Bangladesh, not India, in 2017; the reports stated the victim was a Muslim man called Abu Sayeed; the video corresponded with Google Street View images of a city in Bangladesh.

The 12-second video was shared in this (graphic warning) Facebook post published on January 12, 2019. It has been viewed more than 4,000 times.

The video shows a group of men assaulting a man lying on the ground, before a man wearing a white skullcap attacks him with a large rock.

The Hindi-language text in a red header and footer overlaid on the video translates to English as: “Bengal: Muslim mob in Bengal stone-crushed a Hindu.” 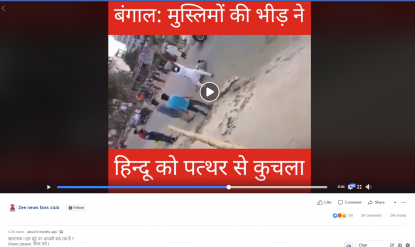 The Facebook post’s caption, written in a mix of Hindi and English, translates as: “Dangerous, what's your take on this issue? Share please.”

The same video was shared in Facebook posts here and here with a similar claim.

The claim is false; the clip has circulated in reports about a murder in Bangladesh, not India.

It contains the same 12-second clip, presented differently – it is rotated 90 degrees clockwise, so the rectangular frame is vertical, and there is no overlaid text.

The Bengali-language caption of the YouTube video translates to English as: “Abu Sayeed, an accused in the murder of Chairman of Jiarkandi Union Monir Hossain Sarkar was hacked to death in Daudkandi Upazila in Comilla.”

Comilla (officially known as Cumilla) is a district located in eastern Bangladesh; here it is on Google Maps. An “Upazila” means an administrative region. The ‘Cumilla Division’ Facebook post has a Bengali-language caption which translates to English as: “A young man named Abu Saeed (24) was killed by a terrorist attack in Daudkandi. One more young man named Mohammad Ali in the attack has been injured and is admitted in the Dhaka medical college hospital. This incident happened near the Gomati bridge of Gouripur Bazar in the Upazila in Comilla.”

The incident was also reported in other local online media on and around the same date, for example here, here and here.

The local media reports stated the victim was Abu Sayeed.

Madhusudhan Sarker, acting police chief of nearby Titas town police station, on July 5, 2019 told AFP: “The victim who died in the incident, Abu Sayeed, was a Muslim.”

AFP found multiple pictures geotagged to the Gouripur Bazar area in Comilla on Google Maps, here and here, which corresponded with the video in the misleading posts.

Below are two screenshots comparisons from the video (top) and two of those geotagged images (bottom):