As reported by AFP, there have been a string of protests across Malawi over the election results, which saw Mutharika re-elected despite accusations from his opponents that he won fraudulently.

One Facebook post, which we’ve archived here, shows the video with a caption reading: “VIDEO: African Revolution. The Masses entering Malawi Statehouse To Get President Mutharika Out.The Army is Siding With The People”. The video has been viewed more than 30,000 times since it was published on July 1. 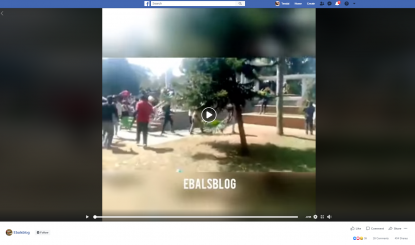 A loud voice can be heard saying: “People crying for their forefather President of Malawi to come, Hastings Kamuzu Banda … [inaudible] ... his spirit so that he can speak to Peter Mutharika to resign just now.”

Multiple versions of the misleading Facebook post can be found here. A Zimbabwean newspaper also incorrectly located the protest at Mutharika’s residence in a tweet which we archived here and which has since been deleted.

Footage published on June 20 documented country-wide unrest over the election results, including this video by AFP videographer George Ntonya who was filming in Capital Hill, the government district of the capital Lilongwe.

Ntonya confirmed that the building in the video is recognisable to locals as the Kamuzu Mausoleum, the final resting place of Malawi’s founding president Hastings Kamuzu Banda. This building is several kilometres away from the Malawi State House where Mutharika is based.

A screenshot taken on July 5, 2019 of the distance on Google Maps

Janet Karim, senior editor of Malawi’s Maravi Post website, tweeted videos of the same protest on June 20, the second of which shows more detail inside the mausoleum, such as the late Banda’s portrait and the memorial plaque.

Inside the Kamuzu Mausoleum. All genuinely weeping for the former leader. pic.twitter.com/UsC35Ehu7C

A comparison with photos published on this travel blog also shows that the protest took place at the Kamuzu Mausoleum. On both the blog and screenshots from the video, you can see a few of the same features:

- The two-step design on the garden stairs

Images edited on July 5, 2019 showing the markings AFP used to verify the location as Kamuzu Mausoleum

- A portrait of the late Banda over the entrance

- The design of the railings leading up the stairs 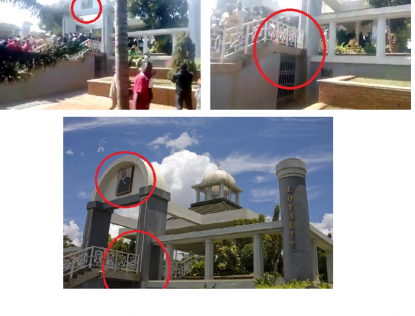 Images edited on July 5, 2019 showing the markings AFP used to verify the location as Kamuzu Mausoleum

This video does show a woman who converted to Islam, but she isn’t ‘Miss Russia’