This is a 2005 picture of a runway in DR Congo, not Nigeria

A picture of a runway with two aircraft parked in a clearing has been shared thousands of times on Facebook alongside claims that it shows a hidden landing strip in northern Nigeria used to import weapons. This is false: the image from 2005 features the Wageni airstrip in Beni, a city in the northeast of the Democratic Republic of Congo (DRC).

A Facebook post with the photo has been shared almost 500 times since it was posted on April 10, 2021. “In the middle of forest in all northern Nigeria, has a runway, where airplanes from foreign countries arrive with weapons (sic),” the caption reads. A screenshot taken on April 19, 2021 showing the false claim

Two aircraft can be seen in the image, parked in a clearing of what looks like a gravel runway surrounded by forest.

The same claim and picture were published here.

Multiple reverse image searches showed that the image was also shared here on Twitter, locating the airstrip in the DRC — not Nigeria.

“In the middle of forest in congo, is a runway, where airplanes from foreign countries arrive with weapons and leave with precious minerals (sic),” reads the tweet published on March 4, 2021.

The same image and claim had been shared a few hours earlier on Facebook. Over the next few days, the posts began making the rounds, including here, here and here. The image was also used to promote a political party in the DRC.

Among the online search results was a link to JetPhotos, a website that boasts more than four million aviation images. According to the site, the picture of the two aircraft and the runway was taken by pilot Michael Fabry. A screenshot taken on April 19, 2021, showing the original image

“This rather crooked runway is just a normal thing here in NE Congo DRC. Look left, that's the last flying, active Vickers Viscount in the world,” the caption reads.

Additional information indicates it was taken on April 21, 2005, and uploaded to the website in May 2006. AFP Fact Check confirmed this using digital verification tool WeVerify. 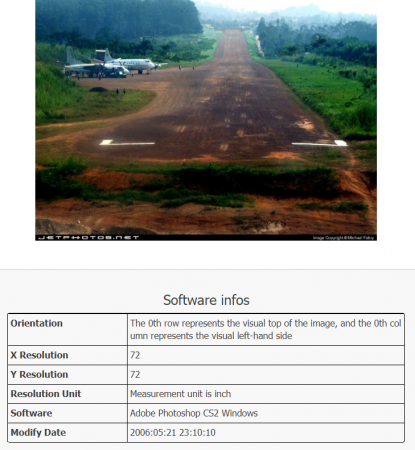 A screenshot taken on April 19, 2021, showing the metadata from the original image

On the same day, Fabry had uploaded another picture of what he also described as “the last active Vickers” bearing the registration 3D-PFI and parked on the apron at Kisangani Bangoka International Airport, DRC. The image was taken on March 9, 2005, a month before his picture of the “crooked” runway. 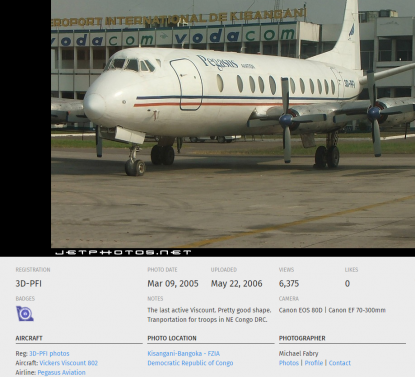 A screenshot taken on April 22, 2021 showing another image of the same Vickers Viscount in DR Congo

“Pretty good shape,” Fabry says of the plane in his caption. “Transportation for troops in NE Congo DRC.”

By using the information in Fabry's descriptions and doing a visual comparison of the two images, AFP Fact Check determined that the aircraft on the side of the dirt runway furthest from the camera was a Vickers Viscount, the world’s first turboprop.

Another search on Google using the plane's registration provided further confirmation, owing to this website run by Vickers Viscount enthusiasts. It gives a detailed history of 3D-PFI, which in 2005 was owned by Pegasus Aviation and, as the last of its kind, was used for “transporting troops to Beni” in northeast DRC.

Screenshot taken on April 22, 2021, showing information about the Vickers Viscount 3D-PFI during its time in DRC

However, Beni has two airports — one just north of the city outside the neighbouring town of Mavivi, and the other within Beni itself, known as the Wageni airstrip.

Fabry, fortunately, supplied a vital clue to the airport he photographed  — the letters FZNP can be seen in the field normally provided for the plane's registration on the JetPhotos website.

A screenshot taken on April 26, 2021, showing the airport code FZNP on JetPhotos website

In this case, the letters are not an aircraft registration but an International Civil Aviation Organization code that identifies airports around the world. And here, the code refers to the Beni airport in Mavivi.

AFP Fact Check has contacted Fabry and will update this post with his comments.

Meanwhile, as to the final resting place of 3D-PFI (ultimately re-registered as 9Q-COD), a picture of it was published here in 2017 on the Facebook page of Ferme Hasna, a camping farm near Lubumbashi in DRC.

It can still be seen from above in satellite imagery on Google Maps but AFP Fact Check has approached the resort's owners to confirm that the aircraft remains on the farm today.