An image of two children has been shared on Facebook alongside a claim that the young boy was severely injured after rescuing his sister from being raped. This is false; the little boy in the photograph did protect his sibling, pictured next to him, but the attack came from a German Shepherd.

“This boy saved his sister from rape,” reads the post’s caption.

Published on April 19, 2021, the post has been shared more than 200 times. It includes an image of two children, one with visible facial injuries. 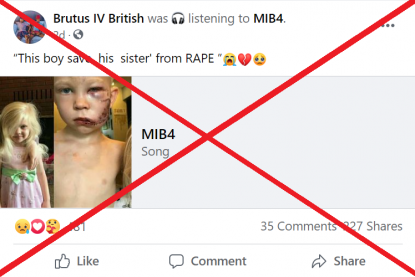 Many of the comments below the post praised the injured child for his actions. 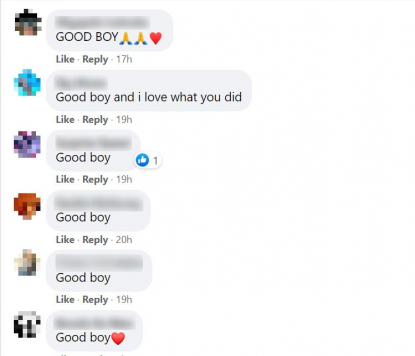 The same claim was also shared on Facebook here.

While the two children pictured are brother and sister, the injuries to the little boy were inflicted by a dog and not someone trying to rape his sibling. However, his deeds during the ordeal were no less heroic.

Using TinEye, AFP Fact Check ran a reverse image search and found various news reports concerning a young boy who made headlines after he was mauled while saving his little sister from a dog attack.

On July 9, 2020, six-year-old Bridger Walker, who lives in Wyoming, United States, put himself between his neighbour’s German Shepherd and his younger sister Brielle as the dog was poised to attack her. She was four at the time.

As a result, Bridger suffered serious injuries to his face and head, which required 90 stitches. His father Robert gave progress reports on Instagram as his son healed from his terrible scars. 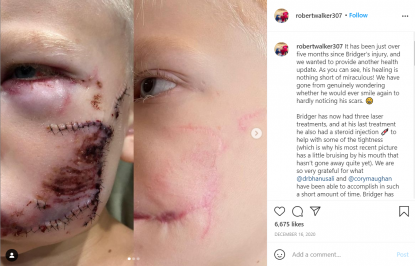 In a video shared on the official Facebook page of the American Red Cross of Wyoming, Bridger’s parents gave more details about the incident and quoted their son’s words soon after the attack.

“If somebody should die, I thought it should have been me,” Bridger had told his father when asked why he didn’t run away.

As word of Bridger’s actions spread, praise came in from all over, including several Hollywood stars who played superhero characters Captain America, Iron Man, Thor and Spiderman.