A video has been viewed tens of thousands of times in multiple posts on Facebook, Twitter and YouTube alongside a claim that it shows an apartment fire that erupted in the Chinese city of Wuhan after concerned residents used alcohol disinfectant against the novel coronavirus. The video has been shared in a misleading context; Wuhan fire officials said the fire was sparked accidentally by a discarded cigarette and refuted the claim that alcohol disinfectant was the cause.

The video was shared in this Facebook post published on February 7, 2020. It has viewed more than 13,000 times. 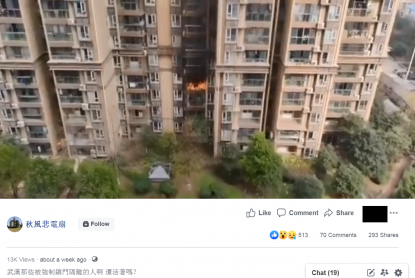 The 15-second video shows a residential building on fire. An explosion can be heard at the 10-second mark.

The post’s traditional Chinese caption translates to English as: “For those in Wuhan who have been compulsorily locked and separated, are they still alive? Do you think this country is safe? In Wuhan disinfecting room with alcohol and tuning on air conditioner led to explosion!”

Wuhan is the epicentre of a novel coronavirus, which has killed at least 1,367 people and infected at least 60,000 people, AFP reported here.

The same video was also shared on YouTube here and on Twitter here with a similar claim.

The video has been shared in a misleading context; fire officials in Wuhan said the blaze happened in Wuhan but was not caused by alcohol disinfectant.

A keyword search on Weibo found this February 3, 2020 post published by the Wuhan Fire Aid Rescue.

The post’s simplified Chinese caption translates to English in the first paragraph as: “#WeiboRumourDebunk# An incident happened at 11:46 on February 3, 2020 on Floor 4, Unit 1, Building 3 of Tuanjiejiaxing Garden on Changfeng Road.”

The caption states in the second paragraph: “Based on investigation so far, the incident is not caused by disinfecting with alcohol at home as claimed online!” 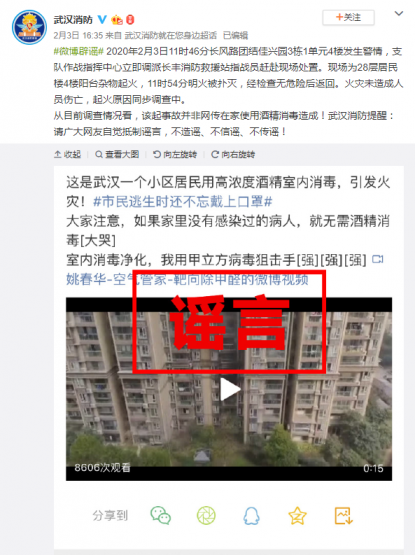 A corresponding residential tower block at Tuanjiejiaxing Garden can be seen on Baidu Maps here. The block is in Wuhan’s Qiaokou district.

Below is a screenshot comparison of the video in the misleading posts (L) and the location on Baidu Maps (R):

The article content follows in part as: “A fire incident took place at 11:45 on February 3 in Room 404, Unit 1, Building 3 of the residential area. The fire started from the balcony, when no one was in the room. According to investigation at the scene, Room 404 is rented by Jin from Yaoji Street, Huangpi district, who was back to Huangpi with family before the Chinese new year. The fire is caused by outcoming kindling (cigarette end) which ignited materials on the balcony. According to the investigation, there is no inflammable and explosive materials such as alcohol in the house. The bang heard at the scene is from a small gas tank explosion within the household hotpot furnace after burning. It's not caused by alcohol disinfection.” 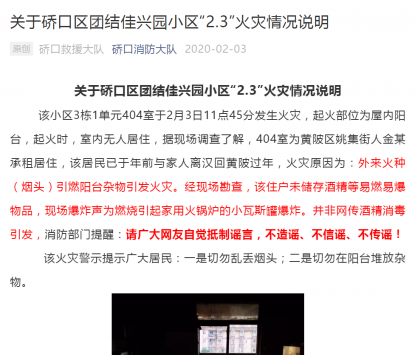 Another video of the same fire was shared here, here, here and here on Facebook with a similar misleading claim about alcohol disinfectant causing the blaze.

The video corresponds with an image of the same tower block in Tuanjiejiaxing Garden.

Below is a screenshot comparison of the second video (L) and the location on Baidu Maps (R):