An image of a bottle of bun spice essence, a flavouring sometimes added to hot cross buns, has been shared thousands of times in multiple Facebook posts. The posts highlight a warning label on the bottle, which states the product is “flammable” and “may cause cancer.” The claim is misleading; the Australian food authority says the ingredients in the essence are all “permitted” in food; the product manufacturer told AFP the warning is only valid when consumed in excess, and it has since changed the composition of the essence so the recent bottles no longer carry the same warning.

The post features an image of a bottle of Keith Harris branded bun spice essence, a flavouring which is sometimes added to hot cross buns, with a warning on the front of the bottle circled in red. 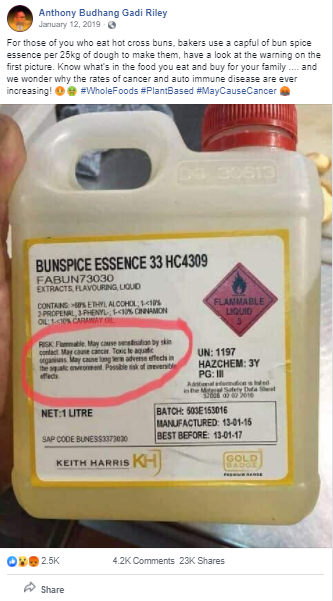 The warning reads: “RISK: Flammable. May cause sensitisation by skin contact. May cause cancer. Toxic to aquatic organisms. May cause long term adverse effects in the aquatic environment. Possible risk of irreversible effects.”

The post’s caption reads: “For those of you who eat hot cross buns, bakers use a capful of bun spice essence per 25kg of dough to make them, have a look at the warning on the first picture. Know what’s in the food you eat and buy for your family .... and we wonder why the rates of cancer and auto immune disease are ever increasing!”

The ingredients listed on the bottle are: Ethyl alcohol, 2-propenal, 3-phenyl, cinnamon oil, and caraway oil.

A similar claim has been shared on Facebook here, here, here and here.

The claim is misleading. A spokesperson from Food Standards Australia and New Zealand (FSANZ), a national food authority, explained that the ingredients listed are “permitted” and “expected” to be used as flavouring in hot cross buns.

In an email to AFP on February 10, 2020, the spokesperson said: “The active ingredients listed on the label are permitted flavouring substances.

“They are flavouring substances we would expect to be used to flavour hot cross buns i.e. cinnamaldehyde (the more common name of the chemical name given, being 2-propenal, 3-phenyl), cinnamon oil and caraway oil. These flavourings can be used for baked goods, along with a wide range of other foods.”

The FSANZ added that ethyl alcohol - or ethanol - in the essence is an expected ingredient, especially as most of it will be burned off in the baking process.

“Such flavour preparations will be used at very small amounts to provide flavour to the food, in this case hot cross buns. The ethanol used as the solvent will mostly be lost during the baking process as it has a reasonably low boiling point and very small quantities will be used,” the spokesperson said.

Ixom, the manufacturer of Keith Harris bun spice essence, also told AFP the warning is only valid when consumed in excess, and it changed the composition of the essence in 2016 so that the warning no longer applies to recent bottles.

“One of the spices used in bun spice is cinnamon oil. Cinnamon oil is naturally occurring, however levels are monitored due to a component it naturally contains,” an Ixom spokesperson told AFP via email on February 12, 2020.

“For this reason, any ingredients using a certain amount of cinnamon oil needs a health warning. It’s Australian law and food regulations. The warning relates to drinking the bunspice essence straight and in copious quantities. Keith Harris changed its formulation back in 2016 reducing the cinnamon oil to a very low level such that the warning is not required.”

“The active ingredient in the cinnamon oil is parts per billion. You would need to eat tonnes of Hot Cross Buns on a regular basis for any ill effects,” the spokesperson added.

This video shows crows in the Chinese city of Xining -- 1,000 miles from Wuhan