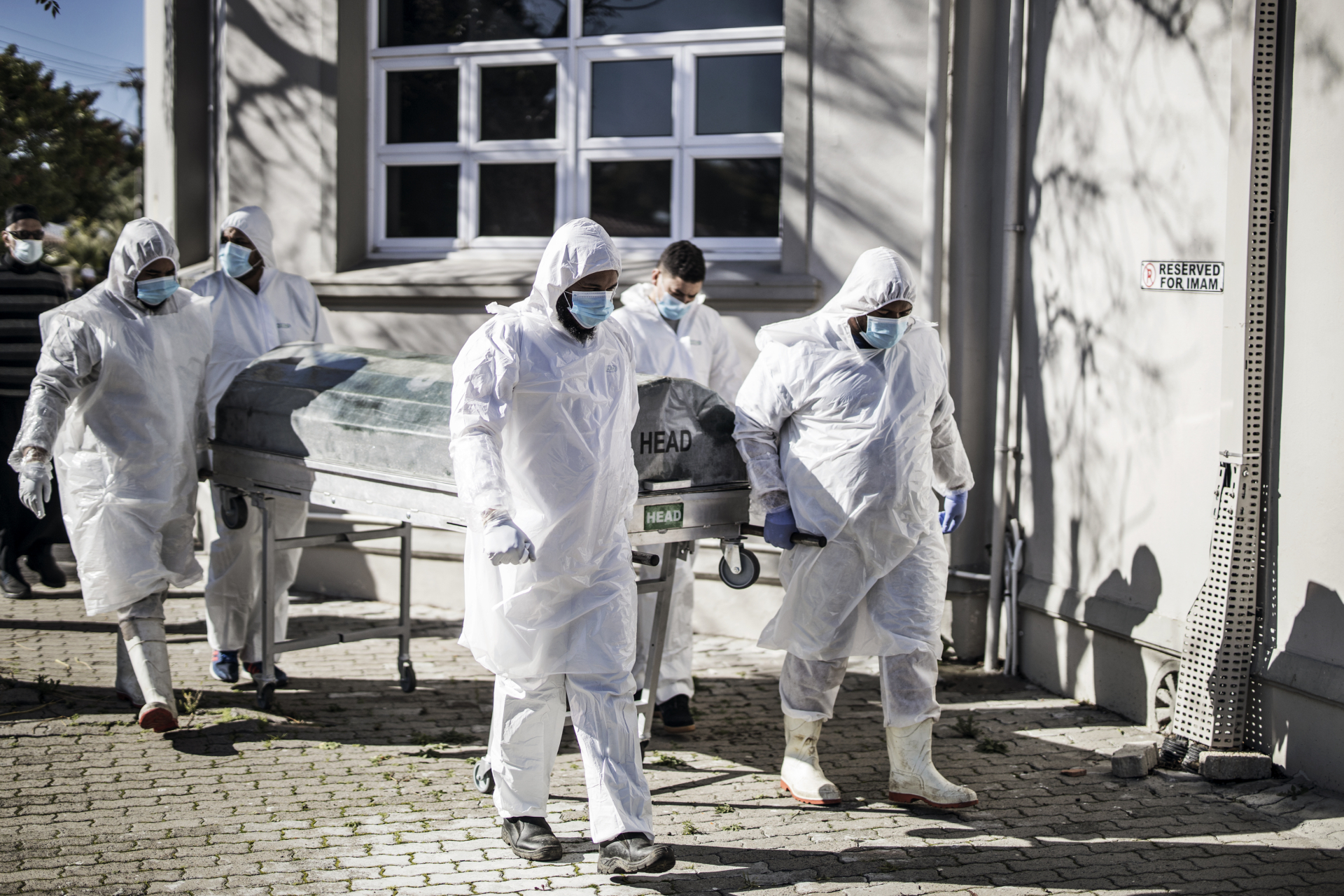 A video shared thousands of times on Facebook shows a panel of medical practicioners presenting various claims about Covid-19, with one denying that the pandemic exists and calling the virus “normal flu”. Experts have used scientific evidence repeatedly to dismiss both these claims – and others in the video – as false, as waves of new infections surge around the world.

The video, which has been editd to about four minutes, was posted by a European-based group of international medical practitioners calling themselves World Doctors Alliance who have railed against lockdowns as a response to the coronavirus pandemic.

The clip in question begins with seven people sitting next to each other with a variety of flags on the table in front of them.

A screenshot of the misleading Facebook video taken on November 5, 2020

As the video progresses, two people in front of the camera identify themselves as doctors and in the minutes that follow, they make certain claims about Covid-19.

The video has been shared thousands of times in South Africa on Facebook by Covid-19 sceptics. The caption in this post, for example, says: “I suppose this also has to be a conspiracy theory ?”. Another post's caption reads: “How many more times do I have to say that you've been CONNED”.

Claim: There is no pandemic

One of the first claims is made by Elke de Klerk, identified in the video as a general practitioner from the Netherlands.

“I want to state that we do not have a medical pandemic or epidemic,” said de Klerk.

However, on March 11, 2020, four months after the novel coronavirus emerged in China, the World Health Organization (WHO) declared Covid-19 a pandemic, which it defines as “the worldwide spread of a new disease”. The US Centers for Disease Control (CDC) agrees with the definition, calling it “an epidemic that has spread over several countries or continents, usually affecting a large number of people.”

“Pandemic is not a word to use lightly or carelessly. It is a word that, if misused, can cause unreasonable fear, or unjustified acceptance that the fight is over, leading to unnecessary suffering and death.”

Ghebreyesus added that this was the first pandemic caused by a coronavirus.

AFP Fact Check has also debunked multiple conspiracy theories here, here and here in which the existence of the virus and the pandemic are challenged.

Claim: Covid-19 is another flu

De Klerk follows up by falsely saying that Covid-19 is a “normal flu virus”. There are similarities, but they are not the same.

“Covid-19 seems to spread more easily than flu and causes more serious illnesses in some people. It can also take longer before people show symptoms and people can be contagious for longer,” says the CDC website. 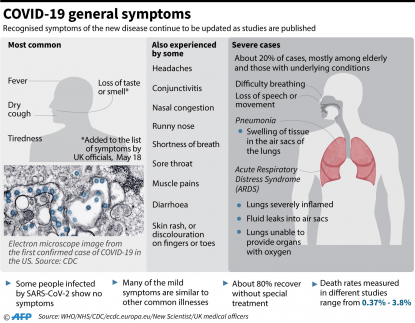 Another important difference is that while there is a vaccine to protect against flu, there is currently none to ward off Covid-19, although global pharmaceutical companies have made major strides – see an AFP report on November 17, 2020, about the progress made with the Pfizer and Moderna vaccines.

“There is no reason for panic – the panic is created by these false-positive PCR tests; 89 percent till 94 percent of those tests are false-positives, they don’t test for the Covid-19 and also the rest is false-negatives, so we have to look at the clinics,” said de Klerk in the video.

Polymerase chain reaction (PCR) tests are a type of diagnostic test used to detect a range of viruses and pathogens. They look for viral genetic material in a respiratory sample, such as a nose, throat swab or a saliva sample. "What it detects is the presence of the virus genome and there is no doubt about it,” Juan Carballeda, researcher at Argentina’s Conicet (National Scientific and Technical Research Council) and member of the Argentine Association of Microbiology, told AFP Fact Check in July.

In the same French debunk, Juan Sabatté, doctor of microbiology, said that the PCR test  “detects specific RNA sequences present in the RNA of the Sars-Cov-2 virus”. RNA (ribonucleic acid), similar to DNA, is a biological macromolecule that stores and processes genetic information, catalyzes chemical reactions and regulates biological processes.

Robert Shmerling, senior faculty editor for Harvard Health Publishing, explained in this piece that a false-positive in a PCR test is rare and most often due to contamination.

“The false positive rate — that is, how often the test says you have the virus when you actually do not — should be close to zero. Most false-positive results are thought to be due to lab contamination or other problems with how the lab has performed the test, not limitations of the test itself,” wrote Shmerling.

Epidemiologists Sheena Sullivan and Jennifer MacLachlan echoed the complexity of a “weak positive” in a medical article in The Conversation on October 6, 2020.

“We identify a sample to be positive or negative based on the number of times we need to amplify the small segments of genetic material to detect the virus — and whether this number falls below or above a certain threshold,” it reads.

This is where the potential for a weak positive lies, with a reading at or just above the threshold.

“Importantly, thresholds are just the point at which we believe we’ve detected something. They’re not 100 percent precise. Sometimes results just above or below the threshold might be false negatives or false positives.”

Another speaker in the video clip, Dolores Cahill, a professor at the medical school at the University College Dublin in Ireland, then shares some erroneous Covid-19 related statistics about the Republic of Ireland.

“Statistics have come out that up until April 2020 there were zero deaths in Ireland. These are the official statistics from the Central Statistics Office (CSO). The first death was in April and in the whole country in 2020 we have 98 deaths out of a country of 5 million people,” said Cahill.

Cahill was asked to resign from a leading European Union scientific committee over her online claims about the Covid-19 pandemic. A European Commission spokesperson told The Irish Times that Cahill’s expressed views were “incompatible” with the scientific foundations of the committee.

AFP Fact Check has previously debunked claims by the discredited researcher where she said that influenza vaccines contain coronaviruses.

A few of the speakers in the video claim that lockdowns cause more harm than good, or that they make no difference and do not save lives.

However, global and national health bodies say that there are significant merits to imposing social restrictions during a pandemic.

While the WHO acknowledges that “large scale physical distancing measures” such as lockdowns can slow Covid‑19 transmission by limiting contact between people, its position is to leave lockdown decisions to be determined by each local situation.

In South Africa, for example, President Cyril Ramaphosa explained back in May why limitations on movement were beneficial to the country, like curtailing the number of infected people.

“As a result of the measures we imposed – and the sacrifices you made – we have managed to slow the rate of infection and prevent our health facilities from being overwhelmed.

“We have used the time during the lockdown to build up an extensive public health response and prepare our health system for the anticipated surge in infections”, he said.

Many countries in Europe have also reimposed restrictions since the end of October 2020 to cope with the second wave of the virus after seeing an “explosion” in cases.

However, there is also evidence that lockdowns have ancillary impacts — in South Africa, the economic and social ramifications have been devastating, worsening income inequalities and amplifying job losses.

WHO, in calling for a swift and united response to the pandemic, also acknowledged the immense toll from Covid-19 on livelihoods, public health and global food security in this statement from October.