A newspaper article shared thousands of times in Nigeria claims that there are only 2.2 billion men in a world that has 5.6 billion women, quoting a “1st Quarter Demography Report 2019” by the United Nations. This is false; the UN's latest population figures, released on June 17, 2019, show that the world body estimates that there are 3.82 billion females and 3.89 billion males.

The report by Nigerian newspaper Daily Independent, which brands itself as “the most read newspaper among business and political elites”, claims that there are now 7.8 billion people in the world.

The article, archived here, and shared more than 6,300 times, claimed that of these, only 2.2 billion are male. 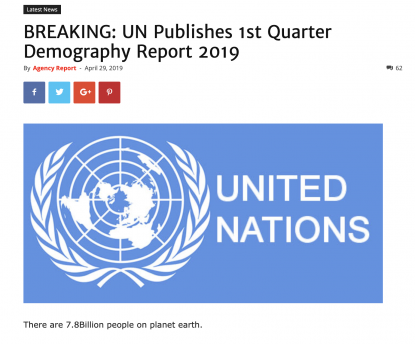 A screenshot taken on June 14, 2019 showing the false report

Multiple Twitter accounts, archived here, here and here, also shared the same article or content of the article. In Kenya, the claims were also used to publish a false article, archived here.

In April, the United Nations Population Fund (UNFPA) released the 2019 State of the World Population Report, which reflects on “the current state of sexual and reproductive health” of the world. That report, which can be found here, did not detail the population of the world by gender.

The last World Population report, published by the UN in 2017 and simplified here, revealed that there were 7,550,262,000 people in the world at the time. An estimated 50.4 percent of the world’s population was male and 49.6 percent female -- highlighting the fact that there were more males than females.

Eddie Wright, communication specialist for youth and population at UNFPA, told AFP that “the most up-to-date” numbers for global population come from the UN Population Division, which is separate from UNFPA.

Those UN projections were published on June 17 and are now available here. They give figures that are very close to those provided by Wright, which still round to 3.82 billion females and 3.89 billion males.

"The overall numbers of males and females globally are about equal," the UN said in its highlights report.