No, this is not a video of US President Trump grabbing a bikini-clad model in London

A video seen hundreds of thousands of times on Facebook claims to show US President Donald Trump suggestively grabbing a bikini-clad model in the United Kingdom. This is false; the video actually shows a lookalike of Trump making a mock grab of a protester in London.

The video, archived here, has been shared more than 5,000 times on Facebook, with the caption: “Trump in London”. 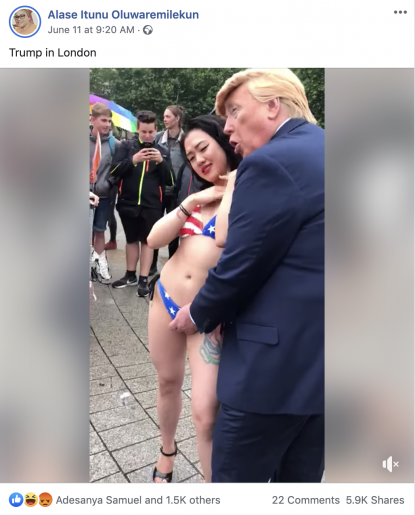 A screenshot taken on June 14, 2019, showing a Facebook post claiming to show US President Trump grabbing a bikini-clad model in London

Many of the commenters seem aware that the video does not show the US president, but others believe he is pictured. One comment reads: “He is Trump. Can you look well, his security are keeping people away from getting closer. Watch very well…”

The video, which is spreading fast in Nigeria, was indeed shot at Trafalgar Square, London, during the president’s visit to the United Kingdom early June 2019, but it does not show Trump.

The man in the video is Dennis Alan, a Trump lookalike, who portrays Trump at major rallies to make mockery of the US president. Here is a BBC report where Alan describes his work as a Trump impersonator.

News photos and videos show that Alan was in the UK during the president’s visit, where the 68-year-old substitute teacher joined the Trafalgar Square rally.

This picture by Mike Kemp of Getty Images puts the video in proper context; the bikini-clad woman holds a placard which reads, “Don’t grab my pussy” while she poses with Trump’s doppelganger. 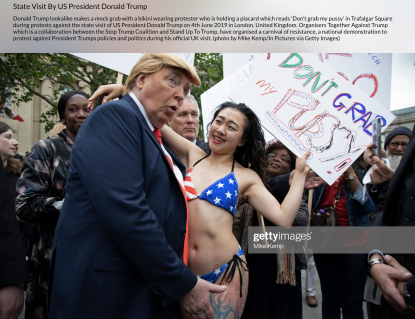 A screenshot taken on June 14, 2019, showing a photo by Mike Kemp of Dennis Alan at a protest in London

This video by Chinese News Agency, Xinhua, also shows Alan posing for pictures with other protesters at Trafalgar Square, UK.

Alison and Alan’s first major Trump stunt was in 2016, when they caused a stir in New York, with fake Trump posing and grabbing models in Manhattan. Here is an AFP video of the event.