Walmart is not offering a ‘free $75 coupon’

Thousands of Facebook users in North America have shared links to an offer which claims retail giant Walmart is giving away free coupons worth $75 This offer is fake. “It’s clearly not a valid website or coupon,” a Walmart spokeswoman told AFP.

The posts say: “Walmart has announced that everyone who shares this link will be sent a $75 coupon for its anniversary.” They directed users to several websites which are not affiliated with Walmart, one of which we archived here. 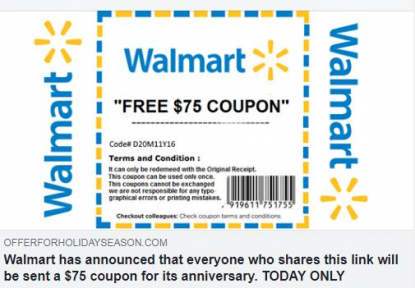 When the user clicks on the site it asks them to answer a series of questions and eventually to share the link on Facebook with “Thank you!” written in the comments field. It also asks to collect personal information. 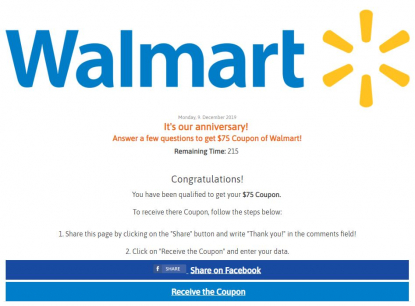 Screenshot taken on December 9, 2019 of a scam website offering a Walmart coupon

However this offer is fake and is not affiliated in any way with Walmart, spokeswoman Tara Aston told AFP by phone on December 9.

“We typically don’t issue coupons,” Aston said. She said Walmart honors manufacturer’s coupons, but it does not offer coupons on Facebook.

Aston directed Walmart customers to this fraud protection website, which says: “Walmart does not solicit online for individuals to complete online surveys for gift cards or free gifts.”

It also suggests: “If you suspect you have been directed to a phony website claiming to be connected with Walmart, please send an email with the link to abuse@walmart.com.”

AFP Fact Check has debunked other “free offers” on Facebook, including non-existent coupons from Molson Coors in Canada and the Australian supermarket Woolworths.