An image of a $100 coupon purportedly for an Australian supermarket chain has been shared repeatedly on Facebook and Twitter alongside a claim that it can be redeemed by anyone who completes a short questionnaire. The claim is false; supermarket chain Woolworths, Australian consumer protection officials and police said the coupon was created as part of an online phishing scam.

The purported coupon for supermarket chain Woolworths was shared here and here on Facebook on November 19, 2019, before it was deleted.

The coupon, which carries Woolworths’ logo and branding, features a $100 sign in the top right-hand corner, a barcode, an expiry date for December 31, 2020, as well as details of instructions for use.

Below is a screenshot of the purported coupon: 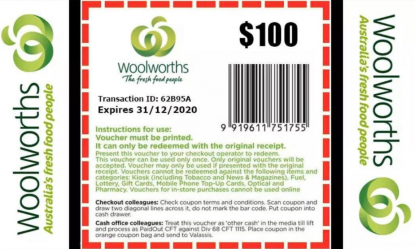 The purported coupon was linked to a web page published on various coupon sites here, here, here and here. The link for the web page was also shared in this tweet without an image.

The page, which also includes Woolworths’ logo, states in part: “It’s our anniversary! Answer a few questions to get a FREE $100 Woolworths coupon!”

The survey consists of the following four questions:

“1. Do you shop at Woolworths? Yes/No;
2. Have you ever been dissatisfied with our services? Yes/No;
3. How old are you? Under 18/Above 18;
4. Will you recommend Woolworths to your friends and family? Yes/No”.

Users are then instructed to share the survey before they can obtain the coupon, as seen in the below screenshot taken at the completion of the questionnaire: But the coupon is not genuine; Woolworths, Australian authorities and police said it was created as part of a scam.

“This post is a scam,” a Woolworths spokesperson told AFP in an email on November 20. “We encourage our customers to be vigilant of online and mobile phishing scams, which seek to imitate well-known brands to collect personal information. We will never ask our customers for their personal or banking details in unsolicited communications."

The spokesperson added that Woolworths reports such scams to the Australian Competition and Consumer Commission’s watchdog office, Scamwatch, which issued a warning about the fake coupon in a tweet on November 19.

New South Wales Police also shared a screenshot of the fabricated coupon in this Facebook post on November 19.

The post's caption states in part: “SCAM ALERT! Watch out for this convincing phishing scam pretending to be from Woolworths.

“There are reports of a sophisticated new 'Woolworths' scam doing the rounds on Facebook today. The post states that 'Woolworths' has announced that every customer that shares this link will be sent a $100 coupon for its anniversary. TODAY ONLY. It also includes an image of the coupon, featuring an official-looking barcode, with the Woolworths' logo, catch phrase and other branding."

Similar fraudulent supermarket offers have been circulating in Australia and other parts of the world, such as a fake offer of a $75 coupon from American chain Costco, as previously debunked by CNN and the Australian Associated Press.