A viral video purports to show mourners ignoring social distancing rules at the funeral of Zindzi Mandela, the youngest daughter of South Africa's first black president and anti-apartheid icon Nelson Mandela. But the claim is false: police confirmed this clip and other similar videos showed footage of an unrelated funeral, which is being investigated for breaking coronavirus laws.

A now-deleted Facebook post shared more than 5,000 times shows a video panning across a large group of people dressed in black.

It alleged that the footage was taken at the funeral of career diplomat Zindzi Mandela who died on July 13, 2020.

According to the post, the event was attended by many more mourners than the 50 allowed under novel coronavirus laws. 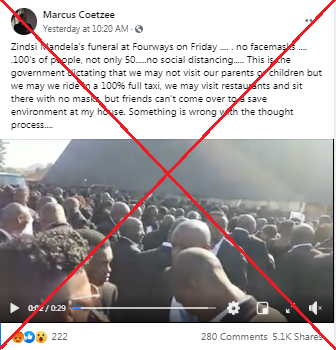 Mandela, who was South Africa's ambassador to Denmark at the time of her death, was buried in a private ceremony on July 17, 2020, as AFP reported here.

The live broadcast shows a modest gathering of people all wearing face masks, unlike those amassed in the footage shared in the misleading videos shared on Facebook.

Screenshot taken from the SABC live broadcast of the funeral

In South Africa, attendance at a funeral is limited to 50 people, according to pandemic regulations, and a permit must be obtained from a magistrate or police station. Furthermore, wearing masks, sanitising hands and social distancing are mandatory.

“We picked that up from social media so we can't say for sure where that was, but it was definitely not Zindzi's funeral. That one was widely covered and the police were monitoring so we know exactly what happened there,” she said.

The footage claimed to be of Mandela’s funeral is now under investigation by the South African Police Service (SAPS), who released a statement referring to multiple social media videos from at least one funeral -- not Mandela's -- that has led to the arrest of two people including a woman.

"A number of other video clips related to the same funeral service are circulating on social media and these also confirm that the number of mourners in attendance was by far in excess of the regulated limit of 50 people," the statement said.

Blue flowers were worn on mourners’ lapels in the misleading video on Facebook and another clip. They were not worn by people at Mandela’s funeral. 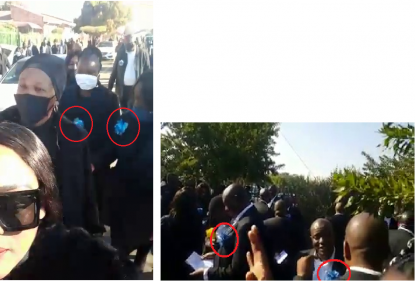