Social media posts shared hundreds of thousands of times purport to show "migrants" being beaten after they tried to disrupt a Christmas parade on Italy's border with Austria. However, the organisers of the parade and the town's mayor say the people in the video were not immigrants. What you can see in the video is typical during "Krampuslauf" festive parades, during which people dressed as devils chase locals through the streets.

The video has been viewed more than a million times on Facebook and Twitter. AFP found posts around Europe in various languages identifying the people in the video as migrants, including in English, French, Spanish, Italian, German, Czech and Flemish.

The footage shows people running through the streets as they are chased and hit with sticks by others dressed as horned, black-clad "devils". 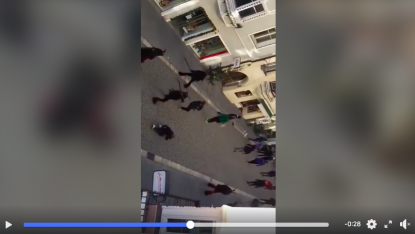 A screenshot of the footage as seen on Facebook, taken on December 10, 2019

"They're crazy!" a woman in the video cries, as a man fallen to the ground continues to receive a beating.

According to the misleading social media posts, the video shows locals beating migrants who had tried to scupper the parade.

"Migrants try to disrupt the parade of St Nicklaus in Austria," British commentator Katie Hopkins said in a tweet shared more than 10,000 times. The tweet not only misidentified the participants, but gave an inaccurate location. 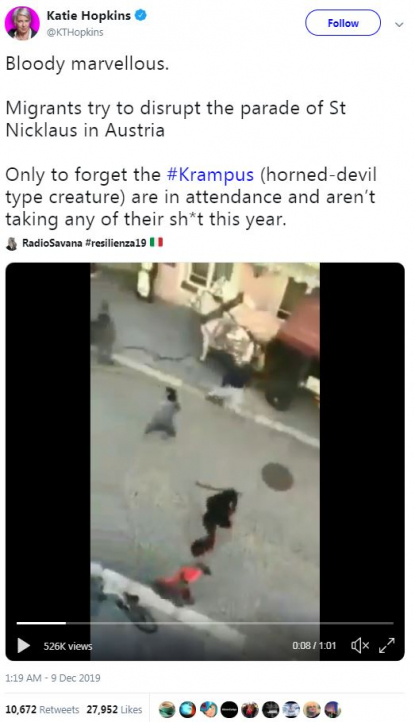 A screenshot of a misleading tweet sharing the footage, taken on December 13, 2019

A Facebook post viewed more than 850,000 times relays claims that "immigrants" had tried to "remove the masks of the Krampus characters".

"Should've beaten them to death," one Facebook user commented. 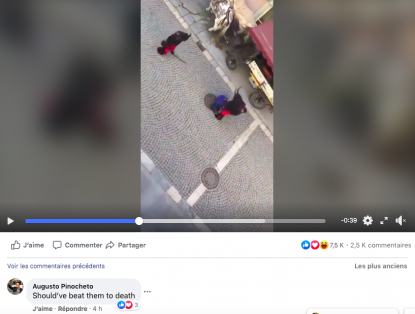 A screenshot of the footage shared on Facebook, taken on December 13, 2019

With dark fur and horns, the "devils" can be seen in Austrian towns and villages during annual Christmas "Krampuslauf" parades, when they roam the streets to frighten naughty children and evil spirits.

As AFP reported in 2017, the demonic creatures are tasked with chasing and whipping people in the crowds, a tradition which isn't as violent as it seems, they say.

"We are trying to make it look brutal but our whips are only made of horse hair," Ernst Eigner, who works as a financial adviser when he is not playing a Krampus, told AFP at the time. "People can hardly feel it if we hit them."

Old footage show the devils in action. Similarly to the video that has gone viral alongside the migrant narrative, you can see people being chased through the streets and "beaten" by the Krampuses.

The footage purportedly showing migrants being beaten was taken on December 5 in Vipiteno, a small Italian town less than 10 kilometres (six miles) from the Austrian border. The area is mainly German-speaking, and the town is known as Sterzing in German.

However, the organisers of the parade and the "Krampus" group, known as Tuifl Sterzing, said the people in the video were "not immigrants".

"The organisers and Tuifl Sterzing vehemently reject any accusation of racism. The people in the video are not immigrants and, over the course of the day, there was no incident involving a foreign person," the Tuifl Sterzing group said in a statement on Facebook (in Italian).

They added that people in the video appear to have dark faces because their faces are painted "according to the tradition". 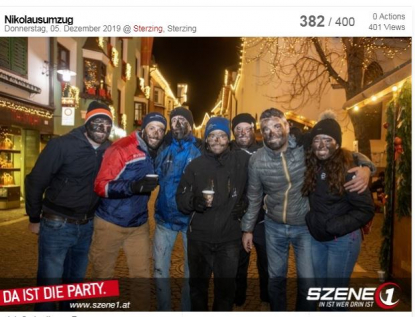 A screenshot of people taking part in the "Krampus" event, taken on December 13, 2019

"They were not foreigners, that's incorrect information," the town's mayor Fritz Karl Messner told local TV (from 1'55", in Italian). "These are not acts of violence."

The only "unacceptable" thing in the video is a "kick" to a man on the ground, which "has nothing to do with the tradition", according to Tuifl Sterzing. The group said the person responsible would be "sanctioned".

"I was born in Vipiteno and know all the people you can see in the video, whether they're devils or participants. None of them are migrants," Maximiliano Ploner said on Facebook (in German and Italian).